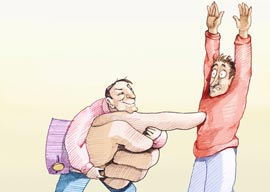 When a San Francisco high school principal named Lena Van Haren withheld student-body election results last week due to a lack of black and Latino winners (the victorious candidates were Asian and white), the right exploded in understandable anger. To conservative commentators, the principal’s actions conjured up images of racial political correctness gone wild. To me, however, the story conjured up different images: naked high school girls, beheaded students, and the death of “dangerous” comedy in the U.S. at the hands of the left and the right.

National Lampoon magazine, in its prime (the 1970s and very early “80s), was something that simply could not exist today. With a staff made up of liberal and conservative writers and editors pursuing one simple goal”to be funny“National Lampoon made equal sport of the left and right. Perhaps more important, the Lampoon was politically incorrect to an insane degree (an impossible degree, by today’s standards). These days, when people reflect, nostalgically or angrily, on the Lampoon‘s fearlessness regarding things like race and ethnicity, they”re likely to think of P.J. O”Rourke’s “Foreigners Around the World” piece from May 1976. It still gets mentioned because O”Rourke is still a presence on the right. But O”Rourke’s piece has nothing on an illustrated feature from the April 1978 Lampoon. Thirty-seven years before Principal Van Haren decided to give her students a lesson in the heavy hand of “diverse democracy,” Shary Flenniken, a seminal figure in National Lampoon history (she was one of the few women to work her way up from writer and artist to a position as editor), crafted a four-page comic spread that managed to be funny, insightful, and devastatingly politically incorrect.

The strip is called “Whiteface,” which should give you an idea of why you can”t find it anywhere online except buried in the National Lampoon Internet archive.

Flenniken’s recurring character Bonnie, a blond, precocious 13-year-old, arrives at school on student-body election day, eager to participate in the grand democratic process. Sadly, Bonnie learns that the faculty members, who are boarded up in the teachers” lounge, have turned the election over to black nationalist student Itty Bitty Meanie Mohammed, a middle school Idi Amin wannabe who has declared that only black students can participate. Bonnie’s black friend puts her in blackface and an Afro wig so she can be smuggled into the auditorium to hear Mohammed’s victory speech, which consists of promises of “culturally-oriented IQ exams,” an “ethnic dress code,” a Lincoln Continental in the driver’s-ed class, and Boone’s Farm wine in the cafeteria. Mohammed forces all the schoolgirls to strip naked and dance for him, which exposes Bonnie’s white body. Furious that a black traitor has smuggled an evil “Nordic” into his victory celebration, Mohammed seals the auditorium as Bonnie escapes, promising to “eliminate” all disloyal black students.

“The left may have dropped the ball regarding outrageous, politically incorrect humor, but the right shows little sign of wanting to recover it.”

The final panel is almost certainly the most brutal image ever featured in a mainstream American comic strip. The next day, the white students notice how peaceful everything is, how devoid of racial unrest. As Bonnie goes to her locker, we see the bloody, decapitated heads of the black students, one per locker, murdered in Mohammed’s purge, as Bonnie’s friend explains that Mohammed has now “transferred to a school with a broader power base.”

It’s a gut punch of a payoff. The images are brutal because the subject matter is. Yet it’s impossible to read it in 2015 without knowing that it could never be published today in any mainstream publication, left, center, or right. A mainstream conservatism that declared John Derbyshire a racist embarrassment to be jettisoned and apologized for would never invite the backlash that would inevitably follow publishing the things that O”Rourke and the other Lampoon editors allowed in the “70s. This gives racial despots like Principal Van Haren an edge. They know that any criticism or satire of their vision of race-based democracy will be limited by boundaries that even their harshest opponents have agreed to adhere to.

I spoke to the cartoonist, Shary Flenniken, about her motivation for creating “Whiteface.” Regarding her own political views, she is the opposite of a conservative or right-winger. She explained that, as someone who identifies primarily with the left, she was always fascinated by the fact that “radical” leftists so often pick on the oppressed they claim to be defending. The desire to satirize this leftist trait began after the Patty Hearst kidnapping. Flenniken, then a newbie cartoonist, was perplexed that the SLA thought it would be effective to kidnap and repeatedly rape a young woman in the name of ending “patriarchal oppression.” By the time she was at the Lampoon, Flenniken saw in the brutal excesses of Idi Amin a vehicle to explore the question “Why are black people killing other black people in Africa?”

“It didn”t make sense to me,” Flenniken told me. “And now it does. I look back and I go, like, “Oh, duh, there’s tribal warfare, there’s a lot of reasons that happens.” But at the time, I was just so naive about, I guess, about race.” Back then, she used her art to work through that naÃ¯vetÃ©, and she laments that today’s artists, because the climate is so different, would not be able to explore an issue like black-on-black crime”an issue she agrees is every bit if not more relevant today as it was in “78″with the same freedom she had in the Lampoon‘s heyday. But in the end, Flenniken said, the strip was primarily about humor: “I thought that was really funny, to bring Idi Amin into that environment, to put something that evil into a high school environment. Also, at the time, the direction at Lampoon was to be outrageous. And my own instinct is to be outrageous.”

Sadly, these days, that instinct among comedians and satirists is smothered. And while it’s neat and tidy to put all the blame on the PC left, that’s not the reality. The right bears equal responsibility. The left may have dropped the ball regarding outrageous, politically incorrect humor, but the right shows little sign of wanting to recover it. While the left may be blinded by political correctness, the right has never shaken the prudishness that gave birth to the American Family Association and its mindless boycotts (in fact, the AFA was the topic of my very first L.A. Times op-ed), exactly twenty years ago). The AFA’s “kill it if you don”t understand it” mentality is even more prevalent in an age in which social media rewards manufactured outrage. The end result is that conservative-friendly satirists who try to go for Lampoon-style outrageousness more often than not find themselves on the receiving end of angry posts and boycott calls from the right.

Mike Judge (King of the Hill) has always been uniquely adept at inserting conservative-friendly themes into his work, in a manner that is never preachy and (more important) usually funny. Episode 5 of his HBO comedy series Silicon Valley contained a story arc that should have had conservatives cheering. The episode followed the characters” attempts to create an “edgy” logo for their tech start-up. Looking for “street cred,” they go to a leftist graffiti artist named Chuy Ramirez. Chuy fancies himself an expert on all things Latino, yet he confuses the company’s Pakistani employee for a Latino (a clever twist on the old gag of white Archie Bunker types who can”t tell minorities apart).