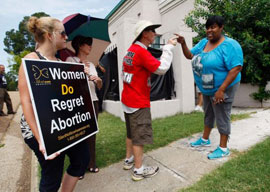 The hoarsely ululating throats of the “pro-life” and “pro-choice” movements screamed at each other outside a small abortion clinic in Jackson, Mississippi last week as a federal judge cock-blocked a state law and allowed the clinic to stay open for now. The law would have effectively shut down the Jackson Women’s Health Organization, which is Mississippi’s last remaining abortion clinic.

Few political issues are as supercharged with moral hysteria as abortion. What’s moral, as always, is in the eye of the moralizer. Outside the clinic and in the comments section of every online news story about the case, there were the requisite dueling accusations of moral turpitude and hypocrisy, of which side values basic human dignity and which doesn”t. The pro-lifers spoke of a legal holocaust of unborn fetuses while the pro-choicers bemoaned state-sanctioned reproductive slavery.

One side warned of bloody coat hangers from back-alley abortions, while the other toted garish picket signs of legally aborted shredded embryos. And all of it was a relentlessly bloody power struggle for the moral upper hand: On one extreme you have those who believe one drop of spilled male semen is an abomination before the Lord, while on the other were the super-empowered mega-sluts who instead choose to sacralize their “sexuality” and blithely eject unwanted fetuses from their wombs with the regularity of old toasters disgorging the morning’s burnt toast.

The struggle was framed in loaded, meaningless jargon and hopelessly reductive phrasing, much of it tied to the forever-in-flux term “rights.” You were either for women’s rights or those of the fetus. You were either waging a war on women or a war on the unborn. One person’s “killing a fetus” is another’s “women’s healthcare.” The phrase “reproductive justice” emerged with unacceptable frequency, and I don”t think it’s unfair to say that anyone who uses that term should have been aborted.

“What’s moral, as always, is in the eye of the moralizer.”

As someone who is nearly able to climax merely by poring over leftist contradictions, I started to notice that it was nearly impossible to endorse abortion without in some way supporting basic eugenic precepts. It’s difficult to argue that all living humans are equal if you also support snuffing the unborn in the womb because they”re “unwanted””or to use an equivalent term with far more sinister implications, because they”re “undesirable.” This is yet another of those supremely enjoyable instances where Nazi-hating leftists find themselves goose-stepping along with an ideology commonly associated with Adolf Hitler.

Supposedly, the mere notion that it would be a good idea for humans to selectively breed for quality was forever “discredited” as “pseudoscience” because of the Holocaust. Never mind that this is as huge a logical leap as claiming that allowing steak knives at dinner tables invariably leads to mass stabbings. And pay no attention to the fact that the modern Israeli state endorses genetic screening for couples who plan to conceive.

Pro-choice leftists revealed their perhaps subconscious eugenic prejudices merely in their descriptions of the Magnolia State’s dysgenically pro-life denizens. Although Mississippi is the blackest state in the country, it’s assumed that when people disparage “Southerners” and all the unflattering statistics about Southern states, they”re always talking about white people. Mississippi was verbally shat upon as a land of smelly, inbred, toothless, barefoot, backwards, ignorant, borderline retarded rednecks who are allowed to marry their cousins yet forbidden to abort the undoubtedly deformed child that would result from their coupling. Though these stereotypes are familiar, it’s hardly ever pointed out that such concepts express a belief that it’s possible to breed for stupidity. Beyond all that, marrying your first cousin is illegal in Mississippi”such a regressive practice is reserved for fortresses of ignorance such as New York and California.