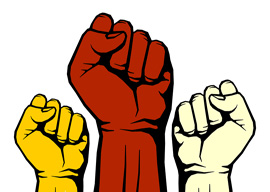 Her name was Nari and she was the tallest Korean girl I’d ever seen. Six foot, at least. It was 1996 and we were on our second date when she started talking politics. Naturally, I assumed she’d be leftist. She was a student at UCLA…’nuff said. But I wasn’t prepared for just how leftist she was. “I plan to devote my life to hegemony,” she told me over dinner. I asked her what she meant by that. “At school they call me ‘Red Emma,’ after Emma Goldman. But I’m far more radical than she was. She believed in free expression, the right of the oppressed to find their own voice. That’s a mistake. We need hegemony. One party, and one set of ideas, enforced vigorously, with swift action taken against any non-hegemonic thoughts or expressions. Everyone needs to be in lockstep, or we can’t move forward.”

I’d grown up surrounded by leftists, mostly Jewish, and almost all cut from the Emma Goldman cloth. In other words, people who at least paid lip service to the notion of free thought and expression. I’d never before encountered someone who I could so clearly envision running a Stalinist gulag or a Maoist reeducation center. Someone who wanted to enforce “thought hegemony,” and who wanted to visit that nightmare upon not just the ruling class, but the “oppressed” as well. And it startled me how quick she was to brag about it.

These days, Nari is a degreed academic (of course) who runs a think tank at a major U.S. university. I don’t know if she’s still battling for her beloved hegemony, but I do know that the ideas she espoused that night have steadily grown in popularity among American leftists. Mind you, leftism has always been marked by purity purges. Communism, the definitive expression of leftist ideals in the 20th century, was as brutal to its own adherents (and to its supposedly beloved “oppressed”) as it was to its “reactionary” enemies. The party loved nothing more than to continually police its own for signs of “counterrevolutionary thought,” sending incorrect thinkers to reeducation camps, or sometimes just executing them outright. This practice of seeking ideological purity found its logical conclusion under the Khmer Rouge, which routinely put children in charge of labor camps and death squads, due to a belief that the very young were pure and uncorrupted by “reactionary” ideas.

The Soviet Union, Maoist China, Cambodia…hegemony. One party, one goal, one way of thinking.

“With fewer and fewer fresh victims to bully, the left is being forced to attack its own.”

But that was foreign communism. Here in the U.S., leftists have generally been good at forming coalitions with other leftists who have different overall priorities. Jews, blacks, feminists, gays, Latinos, straight whites…they used to be able to put aside the differences in their agendas (and identities) and concentrate on the similarities. I’m not saying that all the various factions liked each other, but they formed partnerships when mutually beneficial. These days, however, the left is eating itself alive at a record pace. I submit the following examples. This is not a 2017 recap…this is not a December 2017 recap…this is a second half of December 2017 recap:

Left-wing looneybird Ta-Nehisi Coates found himself embroiled in a very public feud with left-wing loonierbird Cornel West after West attacked Coates for being too narrowly focused in his fight against “white supremacy.” Specifically, West pummeled Coates for not speaking up about Israel’s treatment of the Palestinians, an issue that, as we all know, is of the greatest importance to inner-city American blacks. At its core, this was a fight between two leftist blacks over who is blacker, and whether blacks should fight white supremacy from within the system, as Coates does as a shill for the Democrat Party, or from “the streets,” which West defines as his oak-paneled office at Harvard.

Doesn’t it seem like just yesterday that Meryl Streep was the hero of all time for slamming Trump in a speech at the Golden Globes? Well, it was actually a year ago, and boy, have things changed! This time around, Streep was slammed by fellow left-wing actress Rose McGowan after it was learned that Streep was among the actresses planning to wear black at the upcoming 2018 Globes to protest Hollywood’s sexual-assault problem. McGowan called Streep “part of the problem” because of her silence as her (former) good buddy Harvey Weinstein was raping the town dry. “I despise your hypocrisy,” McGowan tweeted to Streep. Two vocal, well-known Hollywood lefties, technically on the same side, but not getting along well at all.

Over at the extremely popular site afropunk.com, blogger Erin White (who is black) went on the warpath against the “white feminists” who are congratulating themselves for having brought down all those Hollywood abusers. “Don’t forget racism,” was the overall message of her piece. Sounding the tired (but not necessarily untrue) message that feminism is not always inclusive of “people of color,” White demanded “a seat at the table.” She slammed white women for their “compliance” in the Weinstein scandal, and she compared Weinstein’s victims to “the Africans who sold others into the Trans-Atlantic Slave Trade and the Jews who policed Polish ghettos through to their liquidation” (isn’t that “victim shaming”?). As an aside, I feel compelled to add that White also said this in the piece: “White America would rather have an unhinged sexual predator for its President than a Black man.” I feel compelled to mention that because it’s arguably the most stupid thing I’ve ever seen committed to print.

When social media went nuts over photos of a white man rescuing a rabbit from the recent devastating Southern California wildfires, Damon Young of Very Smart Brothas attacked white animal-rights activists because, according to him, they care more about their beloved dogs, cats, and bunnies than they do about (take a guess) black people! The gist of Young’s piece was, “You claim to care about the oppressed, but you don’t care about my oppressed.” And as Young was going after the animal-rights crowd, two left-wing San Diego State University professors bashed something else that’s beloved to the left—organic food! The two profs attacked farmers’ markets as “white spaces where the food consumption habits of white people are normalized.” The gist of the piece? “You progressive white foodies claim to care about ‘environmental injustice,’ but you don’t care about the injustices faced by poor people of color!”

Actress Alexandra Shipp, who has a white mother and a black father, found herself the target of attacks on social media from black activists who were furious that Shipp will be reprising her role as Storm in the upcoming X-Men film. The flak came from “dark skinned rights” advocates who don’t think the biracial Shipp is “black enough” to play the role (ironically a role originated on screen by the biracial Halle Berry). When Shipp called the attacks “racism” and “pure hate,” she was reprimanded by anti-Trump author and blogger Nina Perez (a dark-skinned black woman), who scolded the actress for dismissing the seriousness of “colorism” against “darker-skinned black people.” When Shipp shot back that “90% of the racism I’ve experienced in my lifetime has been at the hands of fellow black people,” more black activists piled on. Now, Shipp is no closet AmRen fan; her pinned tweet for all of 2017 reads, “if you’re a member or sympathize for the alt-right you can unfollow tf outta me. Dnt watch my movies dnt b a fan fuck it dnt breathe.” This is just a case of a bunch of black leftists brawling over who’s blacker and more “anti-racist.”