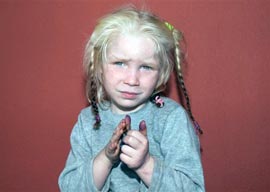 Investigators who”d raided a dilapidated Roma camp in central Greece last week in search of illegal drugs and firearms didn”t expect to find a pale-skinned four-year-old girl that one Greek paper is now calling “a blonde angel without an identity.”

Photos of the girl taken after police rescued her bleed with cultural and ethnic incongruity. Known only as “Maria,” there she is”a smudgy, mangy, rodent-bitten street urchin”a typical vagrant street-hustling Gypsy child”but with Nordic features. It looks as if someone had taken a clean First World canvas and splattered it with a janitor’s bucket full of the Third World.

The girl’s “parents” turned out to be a Roma couple that originally gave conflicting stories of how they acquired her, but DNA tests confirmed they were not her biological parents. Then it emerged that the couple had registered and were receiving public assistance for 14 children. Among these were three kids the mother had allegedly spawned during a five-month span in 1993 and another three her womb reputedly spat out during a fevered three-month birthin” jag in 1995. The couple was receiving close to $4,000 a month in child benefits and has been arrested on suspicion of abducting a minor.

“One would think that if they were really that good at fortunetelling, the Gypsies would have seen the Nazis coming.”

Greece’s Gypsy population of around 300,000 is said to be 80% illiterate, which doesn”t quite help their public image. Neither does the case of the little blonde mystery angel. Gypsies have suffered from bad PR ever since they lurched northward from India a thousand or more years ago and slowly crept their way westward.

In their rough and rocky diaspora throughout Europe, Gypsies (or, if you”re far more sensitive than I am, the Roma, the Romani, or the Romani People if you want to go completely bananas) can in many ways be compared to Jewish people. They have a reputation for wandering. For preserving their culture and forbidding intermarriage. For living parasitically off of host populations. For acting as spies and forming a Fifth Column. For being shunned and hated everywhere they go. And, undeserved or not, both groups share a reputation for being cheap swindlers. Hence the verb “to gyp” (and the much less commonly used verb “to Jew”).

As with the idiots who originally thought American Indians were, well, Indians, the truly Indian Roma populations were originally mistaken as Egyptians”hence the “gyp” in “Gypsy.”

The Gypsy version of anti-Semitism is known as Antiziganism, AKA Anti-Romanyism AKA Anti-Gypsyism. Such hateful sentiments have allegedly led to persecution, enslavement, and often slaughter, of Roma people ever since they set foot in Europe. During WWII, the Nazis routinely sterilized, ghettoized, deported, and snuffed them. The death toll of the Gypsy Holocaust, referred to among the Roma as the Porajmos“the “Devouring””range from a quarter million on the low end to a million and a half on the high end.

(Side note: One would think that if they were really that good at fortunetelling, the Gypsies would have seen the Nazis coming.)

Gypsies and Jews are also similar in that they”ve each maintained a stubborn cultural separateness over centuries in Europe. Much remains unknown about Roma culture because it exists beneath a veil of secrecy and insularity, with outsiders viewed as mostly hostile enemies. Whereas Jews have their goyim, Gypsies are suspicious of the gadze. And like Jews before the establishment of Israel, the world’s Gypsy population exists as a sort of “movable country” without a homeland.

But Gypsies are entirely unlike Jews in their flabbergasting lack of educational and technological achievement. In their staggering lack of cultural and financial power. In the fact that poverty follows them everywhere like body odor. In the sense that they appear to be so dumb and disorganized, it hasn”t even occurred to them to carve out a homeland of their own somewhere.