The Little Bomb That Couldn”t 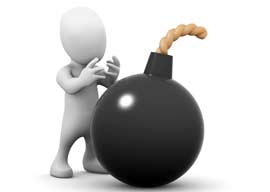 I”ll provide further details as they come in.

Many black people on Twitter”as well as untold legions of their white enablers and allies”appear very pissed that the NAACP story never really got “legs,” as they like to say in the publishing biz. Or as the blacks like to say, there may be a bit of “player hating” going on here by disgruntled African Americans who feel nudged out of the victimization spotlight, however temporarily. They decry the fact that the racist media cares about a dozen dead white Parisians much more than it does about the slightly scuffed side of a building in Colorado.

Trying to race-shame you with all the sadistic ferocity of someone slapping your face with a giant dead fish, they allege this is further evidence of things such as white privilege and institutional racism and the media’s utter indifference toward the terrorist violence that “black bodies” have to deal with even when they open their front door and bend down to pick up the morning newspaper off the front stoop. They wail that “race relations in this country” are at a fever point, even after “all we”ve done to struggle for progress” and that “white people shouldn”t be so mean” and that “black bodies are being gunned down like so many jackrabbits in Tennessee Ernie Ford’s watermelon patch” and that “black people have every right to hoot and holler in the streets while leaping up and down, scratching their genitals, and burning convenience stores to the ground simply because history says so.”

“If there were much substance to this story, the American media would be running with it like Jesse Owens at the Berlin Olympics.”

Oh, shut the hell up at least for five minutes…please? If there were much substance to this story, the American media would be running with it like Jesse Owens at the Berlin Olympics. Embarrassingly large swaths of the American media bend over backwards so far that they”re sniffing their own asses trying to generate endless stories about RACIST WHITE HATRED. They are dying to find racist white hatred wherever they can find it. If they can”t find it”which usually seems to be the case these days”well, they”ll just make it up.

And when violent agitations confronted and dozens of other brave men and women while walking through a hostile town in Missouri during the NAACP’s Journey for Justice: Ferguson to Jefferson City March last month, we kept marching.

Read that out loud. Like, two or three times. What the hell does that mean? I can”t make head or tail out of it. Anyone?

Maybe it’s not a good idea to depend on an NAACP spokesman for information about an alleged NAACP bombing, so let’s review the available evidence. The description of the bombing suspect from the Colorado Springs police seems highly passive-aggressive if you ask me:

On Friday, authorities released a rather hilarious police sketch of the person of interest in the bombing investigation, a hastily dashed-off scribbling which makes him look like the bastard hybrid child of a Martian and the Pillsbury Doughboy. It’s quite the sketchy sketch. (And by the way, the sketch makes it appear as if this guy shaved his head, which is not the same thing as the official description, which is that he is “balding.” Not all of us white guys who shave our heads are balding. Statistically speaking, it’s really not many of us at all.)

I don”t claim to know what happened, only that there are several amusing possibilities. Let’s go through the possible scenarios…

It could have been a bona fide racially motivated attempted terrorist bombing by a balding white guy with a dirty pickup truck. If so, we are dealing with one highly unskilled bomber. Check out as two NAACP members observe the tremendous amount of damage from the bombing. Someone on Twitter claims to have morning farts that wreak more devastation than that.

In what may have been a deliberate attempt to make things look worse than they were, progressive white MSNBC host Chris Hayes, a verified friend of the black man, covered the bombing story while a photo montage that unfolded behind him included a still photo of massive destruction to a storefront that turned out to be from the recent unrest in Paris rather than outside the NAACP office in Colorado Springs. Hayes apologized for the network’s faux pas by writing “Our bad“ on Twitter. Just when you think Chris Hayes couldn’t get any worse, he goes ahead and says “Our bad.”