The Long March Through the Arcade 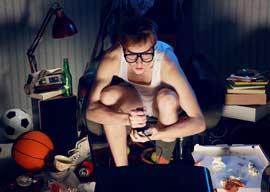 First they came to ruthlessly pillage the comic-book world, so I suppose it’s only natural”in their inimitably unnatural way”that the social-justice warriors would also lay siege to the dark, musty, Cheeto-scented world of video games.

I was unaware of “Gamergate” until last Friday, when a local Atlanta filmmaker asked me to appear as a talking dented head in a planned documentary tentatively titled The Sarkeesian Effect: Peering Inside the World of Social Justice Warriors.

The title refers to Anita Sarkeesian, a dogged critic of “misogyny” in the gaming world, a woman whose vulva apparently clenches tightly shut at the fact that video games still perpetuate “tropes” such as the fact that teenage boys enjoy looking at scantily clad damsels in distress while they’re killing male opponents on a computer screen. In 2012 after Sarkeesian launched a wildly successful Kickstarter campaign which yielded her $160,000 so she could sit in front of a webcam and yelp about misogyny, she was allegedly subjected to various forms of Internet harassment, most notoriously a video game called Beat Up Anita Sarkeesian.

Gamergate, though, erupted in August after the spurned male lover of Zoe Quinn”she’s a game “developer” whose sole claim to fame is Depression Quest, a text-based, non-video “interactive fiction game where you play as someone living with depression””went public with accusations of Quinn’s infidelity and insinuations that she was a pathological liar concerned far more with personal power than social justice.

I will now pause to exclaim that Depression Quest sounds like a big heapin” basket full o’ fun. If I was sitting home alone in the basement on a Friday night, I can’t think of anything I’d like to do more than pretend I was depressed.

“They will get your joystick only when they pry it from your cold, dead fingers.”

In mid-August, Quinn’s ex-boyfriend, an alleged male named Eron Gjoni, published a long, weepy post about how Quinn had serially cheated on him with five other males in the gaming industry, implying that she had slept her way into receiving positive press about her silly little depressing game. I don’t really know or care whether this is true, although Gjoni comes off like such a poncy little man-baby that I would have cheated on him, too.

Yet this proved to be the gaming industry’s equivalent of the assassination of Archduke Franz Ferdinand, leading to accusations among the “silent majority” of gamers that gaming journalists were corrupt, were sold out to a tiny minority of fanatical social-justice warriors, and were openly hostile to the grand masses that formed their core constituency. Accusations of threats and stalking and doxing (publishing personal information) flew like so many glowing digital bullets in all directions.

From personal experience I know not to put any level of malice and deceit past the social-justice warriors, but if those who formed the backlash were actively threatening and stalking people, that’s a counterproductive move. I also say that from personal experience. The worst thing you can do to a wannabe victim is give them what they want.

Although I’ve never been much of a gamer, I can relate to being an isolated, misunderstood teenage male. The home version of Pong didn’t even exist until I was a teenager. I indulged my adolescent alienation in other ways”first through a Marx Brothers obsession, then as a full-on Jesus freak, and then through music and drugs. But yes, there were spates that were so lonely I thought it would crush my ribs.

I wasted quite a few quarters playing Moon Cresta in Center City Philly arcades in the early 1980s and quite a few hours playing early versions of Macbrickout on my Mac Quadra 650 in the mid-90s, and that’s the last time I can recall even playing a video game. So I can’t speak with any authority as someone who remotely understands the “gaming community” as it exists.

But although I know what it’s like to be a depressed young male, I can’t relate on any level to being a witch hunter, and that is precisely what these vicious, maladjusted, hypocritical social-justice warriors are. I’ve seen so many of them ceaselessly campaign against all the “hate” and “violence” they insist is all around them, yet one by one they invariably peel off their masks to reveal that all this finger-pointing was mere projection. They are as hateful as they come these days. Any group of Klansmen roasting marshmallows would be far more cheerful and welcoming.

The problem with SJWs isn’t tolerance but rather a strident and unyielding intolerance. They won’t be satisfied until the entire world is infected with their mentality. For all that the SJWs whine about colonialism and cultural appropriation, it appears they will never rest until every last square inch on Earth is a mirror image of their absurdly gullible and hyper-moralistic belief system.