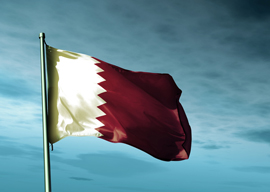 Next time you read about an auctioneer’s gavel coming down on a 150-million-dollar painting bought by some flunky representing the gangster ruling family of Qatar, don’t ooh or aah, but think of those monsters in Iraq and Syria who have their children pose on video while holding up the severed heads of innocents. And no, it’s not a stretch. Without Qatar’s gold IS would not exist, not even in the movies. Or let me put it another way. Had Calvin Coolidge or Herbert Hoover given White House dinners for Al Capone, the outcry would have been heard all the way down to Patagonia. (Although poor old Al had nothing on the Thanis as far as murder is concerned.)

Yet as reported by Charles Moore in the Spectator, not only did the head mobster lunch with the Queen at Windsor, a cousin and his mother also lunched two days later at Windsor and caused a stir because they were not included in the Queen’s carriage. The Gulf Sopranos sponsored Ascot this year, and Elizabeth Anson was their PR person who burst into tears after failing to include the Sopranos in the lead carriage. All I can say is shame on Ascot, more shame on Anson, and eternal shame on the stuffed shirts who forced the Queen to break bread with desert mobsters.

“All I can say is shame on Ascot, more shame on Anson, and eternal shame on the stuffed shirts who forced the Queen to break bread with desert mobsters.”

They say Brits will do anything for money, but the rest of the Western world is just as bad. Just look at how a tiny Gulf nation of 250,000 goatherds managed to land the World Cup in 2022. To call the bribes the Thani family paid to FIFA delegates colossal would be an understatement. But forget the 50 degrees Centigrade heat and the fact that football is unplayable in that pit—the scandal of modern day slavery as practiced by the Qataris is a far bigger depravity overlooked by the West. In fact, calling foreign workers indentured servants is a euphemism; they are slaves. Foreign workers do not enjoy a minimum wage in Qatar, nor do they have any rights. Nor are they allowed to change jobs, however feudal the conditions, nor get a driving license, rent a room, or open a checking account unless they have their employer’s permission. Thousands have died while working in appalling conditions, and hundreds of Nepalese alone, which caused an investigation by the Norway-based Global Network for Rights and Development to send two researchers. Last week the Qatari government confirmed that the two have been arrested and are in prison. So much for European influence in that sweaty hellhole.

In their craven search for money, Europeans have sold everything to these ghastly camel herders but their mother, because the Qatari gang is obviously not interested in the latter. Nothing is sacred, everything’s for sale. Qatar owns a majority share in Sainsbury’s, owns Harrods outright, a large share of Heathrow airport, large stretches of real estate in Knightsbridge and in the City, and is allegedly trying to oil itself to buy Claridge’s through a straw man, plus the French football team PSG, and major shares in Germany’s Volkswagen. Last but not least, the Al Jazeera TV network, one that poses as an unaligned network but in reality works for the gang called Thani.

So far so bad, but it gets much worse.  In cahoots with the Saudis and the Kuwaitis, the Qatari ruling family allowed various so-called private businessmen to raise money for Jihad. Saudi money funneled through Islamic charities had been funding terrorism since the Eighties. Ditto the Kuwaitis. These private fund-raisers are an obvious charade. It’s the Kuwaiti, Saudi, and Qatari ruling families’ money that ends up in terrorist hands. It’s called protection money. All three ruling “monarchies” are basically illegitimate, and their power derives certainly not from the people but from their oil and gas wealth and their ability to bribe Uncle Sam and other Western powers to keep them as heads.