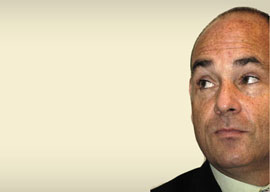 George Smitherman is supposed to be the mayor of Toronto.

During the 2010 election, the former deputy premier was the liberal elite’s standard-bearer. Sure, his name was attached to a few sordid, multi-million-dollar political disasters, but that’s true of pretty much every career politician of any stripe.

He was”in the tradition of the city’s slew of progressive mayors”smoothly well spoken and unfailingly presentable, if occasionally cranky. He was the cool kind of bald.

And most importantly, he was gay.

In 2007, Smitherman and his “husband,” Christopher Peloso, were “married” in a “traditional aboriginal ceremony.” They promptly adopted two children.

How could he possibly lose?

“I can”t be the only Torontonian who’s postponing their own suicide so I can see how this race turns out.”

The polls closed at 8PM. Literally a few minutes later, Rob Ford”fat, clumsy, inarticulate, suburban, stubborn; married to a woman in a ceremony that included neither an eagle feather nor smudge; a father the old-fashioned way, however unpalatable that notion might be”was declared the winner. In fact, the result was what passes these days for a landslide: Ford received just over 51% of the vote to Smitherman’s 31%.

The elites were dumbfounded and furious.

Led by the Toronto Star, there began an all-out “get Ford” campaign“legal machinations, anonymous rumors, lawsuits, weird (and in one case, misinterpreted) cell-phone videos, borderline stalking, and satirical sketches (sometimes combined)”that eventually erupted into one of the biggest international stories of 2013, the details of which are all too familiar.

Meanwhile, Smitherman faded into the background, taking up the type of semi-imaginary jobs”“broadcaster,” “consultant””befitting his rank and making the usual noises about spending more time with his awfully 21st-century family.

Then a police dog found his “husband” curled up near some railway tracks.

The day before, on September 10 of last year, Smitherman had reported Peloso missing. Wall-to-wall local media coverage led some to mutter that the disappearance of a lowlier adult civilian would never have garnered such attention or witnessed such a large and speedy outlay of police resources.

Were drugs involved? Smitherman and Peloso had met on Toronto’s gay scene, and the former fairly boasted about his one-time addiction to “party drugs,” contrasting himself favorably to that tacky crack smoker Ford.

Whatever prompted Peloso’s brief peregrinations, they were more or less forgotten as the Ford saga chugged along.

Then Peloso wandered off again. This time, the outcome was tragic.

On December 30, Peloso was found dead, a suicide. In his official statement, Smitherman said he would “find comfort somehow in knowing that [Peloso] has found peace from the depression that has wreaked havoc on his mind.”

Now, I’m as tired of playing “Imagine If” as anybody else is. You know: the game where we play “Imagine if…Rush Limbaugh had joked about Mitt Romney’s black grandson.” Or “Imagine if Dennis Miller had called a former Democratic governor a ‘fucking jackoff cunt-face jazzy wondergirl’ with ‘a family of chinese [sic] poor people living in her cunt hole.’” Visit the Drudge Report at random and you’ll find a fresh, fitting example.