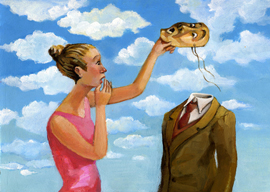 On February 27, 2013, Canadian historian and (more or less) conservative political operative Tom Flanagan gave a lecture in Lethbridge, Alberta. Driving home without a cell phone, listening to an audiobook instead of the radio, he found out when he reached Calgary two and a half hours later that in the meantime his reputation, career, and even some friendships of many years had been shattered.

It sounds like a Philip Roth novel, but the story is all too real: Flanagan tells it in his slender memoir, Persona Non Grata: The Death of Free Speech in the Internet Age.)

I think about what happened to Tom Flanagan a lot. And about Richard Jewell. And the McMartin family.

I thought about them that Sunday evening late last month when Ghomeshi-quiddick started trickling its way onto my computer screen and into my email inbox.

“The “abused children’s graveyard” trope must be stored in a particularly excitable area of the brain, where we also file away Grimms” fairy tales and similar kinder trauma.”

It helps that I worked for Catholic newspapers during not only the American priest sex abuse scandal, but also the Canadian one that burst forth a dozen years earlier. So I”ve had it involuntarily drilled into my mind that:

a.) Powerful people do evil stuff, which is

b.) frequently covered up by other powerful people, but

d.) all investigations, reports, exposÃ©s, and royal commissions into said evil stuff will either be ignored completely“or they will draw precisely the wrong conclusions and recommend dubious courses of action. (Like … more reports!)

Oh, and this supposedly world-historical story will quietly peter out of the mainstream press when emerging facts challenge the elite narrative. (For instance, when those child-abusing priests turn out to be overwhelmingly gay, not straight.)

A formula more sophisticated than gut instinct or the smell test would be handy. Even a raving Islamophobe like myself stupidly refused to write about those “Rotherham Muslim/schoolgirl grooming“ stories at first, especially when confronted with headlines like “Missing girl’s body “put into kebab.“” They all sounded too “Maria Monk“ to be legit.

Except, as I”m forced to acknowledge, the Awful Disclosures hoax of 1836 was factually inaccurate, but weirdly, intuitively right; while no such “gruesome graveyard under the convent for the slaughtered babies of the nuns” existed beyond nativist fever dreams, we now know that the abuse of many Catholic children”although not as many as we were told”was buried throughout the following century.

I remind myself that time and again, multimillion-dollar investigations fail to turn up any evidence of these “pedophile rings.” Yet that troublesome part of my brain sparks to life, whispering, “Well, they would say that, wouldn”t they …?”

So what to make of Amy Berg’s new documentary, An Open Secret?