The NAACP’s Monster Under the Bed 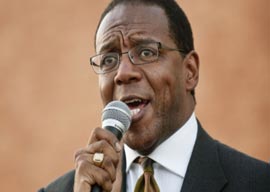 The NAACP’s sole weapon is fear. The organization gets its way because many businesses and public figures live in fear of being slapped with the label “racist.” But what, if anything, frightens the NAACP? No, it’s not your conservative blog or podcast, so don”t flatter yourself. The NAACP isn”t scared of you. The NAACP witch-hunters aren”t scared of anyone who tries to counter their fear tactics with logic and rationality, because they know that in the end fear always trumps reason.

However, there is one person who scares the bejesus out of the NAACP leadership, and he’s one of their own officials: an unstoppable, unkillable bugbear named Reverend Curtis Everette Gatewood. NAACP leaders cower in his presence. Gatewood dislikes Jews, Israel, immigrants, and non-Christians. He’s damned Hillary Clinton supporters to hell, applauded the Baltimore rioters, compared black moms who stop their sons from rioting to white slave masters, co-organized a protest meeting at which Obama was repeatedly called a “nigger,” and pledged the NAACP’s support to an organization that opposes the NAACP, hurls racist bile at Asian immigrants and Jews, and calls Martin Luther King an “uncle Tom.”

And yet the national NAACP can”t, or won”t, get rid of the guy.

Reverend Gatewood first made minor headlines right after 9/11. On September 15th, 2001, Gatewood (then president of the Durham, North Carolina, NAACP) gave a fiery speech at a monthly NAACP meeting in which he implied that the World Trade Center victims were racists. Almost immediately, NAACP National President Kweisi Mfume officially reprimanded Gatewood, but the Durham NAACP chapter unanimously gave him a vote of confidence. So Gatewood doubled-down, claiming that 9/11 was a just punishment from God on America, and that all Americans must accept Jesus or “go to hell.”

“The NAACP will continue to shelter Gatewood, or cower from him, as it also continues to smear conservatives as “racists.””

And Gatewood wasn”t through. He pledged the support of his NAACP chapter to the African People’s Socialist Party/Uhuru Movement, a black separatist organization that seeks to foment a violent revolution to create an independent black nation on U.S. soil. The Uhuru militants have, in the past, called for the murder of Archbishop Desmond Tutu (in retaliation for him not ordering the mass execution of white South Africans following the end of Apartheid), and the expulsion of “parasitic” Asian immigrants and business owners. On a broadcast of the Uhuru radio program, Gatewood stated that his NAACP chapter stands 100% behind Uhurus” goals.

In October 2002, the weekly “social justice” publication The Black Commentator observed that Gatewood “has all but dared Mfume to strip him of his chapter presidency.” Scared out of his wits, Mfume took a page from the Teachers Union manual, “How to Pretend to Fire Someone You Can”t Actually Fire,” and removed Gatewood from the head of the Durham chapter, shuffling him to a new position, “2nd vice president of the North Carolina NAACP Conference of Branches,” perhaps hoping that having to recite a title that long would rob Gatewood of the breath needed to make inflammatory statements.

It didn”t work. During the 2008 primary, he told the Henderson (North Carolina) Daily Dispatch that black Hillary Clinton supporters were hellbound: “¨

“So-called “black leaders” who are being used as Clinton attack-dogs to discredit Obama, are fat from the fruit produced by Dr. King’s blood, and have been on break from the work of freedom fighting for the past 40 years, are unworthy of speaking on our behalf. Further, they have no vision, no regard for King’s legacy, and appear willing to ride blindfolded on the Clinton bandwagon while traveling toward the deepest parts of hell.”

On the Richard Brown Show, a North Carolina radio program, Gatewood went off on a baffling fear-mongering riff about how immigrants specifically come to this country because they want to “target” black people by selling them drugs. On Facebook, he promulgated an odd conspiracy theory regarding the assassination of Obama by Jews and others:

“If Obama is assassinated (which is highly likely given how the stage is being set and invitations to assassination are being sent to Israel/Jews as well as white CEOs and poor white racists), it will further escalate the violence and divide that is already on the way.”

And speaking of escalation, in 2009 Gatewood again teamed up with the Uhurus to stage a massive demonstration in Washington DC against Obama and Israel (Gatewood’s earlier enthusiasm for Obama apparently having been dampened by the fact that “the revolution” had not come quickly or violently enough after the election). One of Gatewood and the Uhurus” invited speakers was Pam Africa, president of Friends of Mumia Abu-Jamal and formerly a member of the MOVE black power cult. At the demonstration, to thundering applause, Africa repeatedly called Obama a “nigger motherfucker” and “head nigger,” inciting the crowd that he has to be “taken down.” Another participant, Larry Hales, dedicated his speech to the Muslim gunman who, only two days earlier, had cold-bloodedly murdered thirteen people at Fort Hood. The killer was cheered as a “hero” and a “brother.” Yet another invited speaker, Abdul Alim Musa, used his time at the mic to salute Hezbollah. The crowd erupted into applause every time Musa mentioned the killing of Israelis.

So here’s where I got involved, GOP golden man-child that I was at the time. In 2010, the national NAACP had issued a demand that the Tea Party expel all “racists” from within its ranks. I thought it might be edifying to bring attention to the fact that the hypocritical NAACP had still not removed Gatewood. My piece was picked up by Glenn Beck, and received massive exposure. In response, the national NAACP quietly removed Gatewood from his position (again), and quietly shuffled him around (again). In summer 2013, Gatewood was given the unofficial job of organizing the North Carolina NAACP’s Historic Thousands on Jones Street HKonJ People’s Assembly Coalition (the NAACP really knows how to come up with short, snappy titles), in which he oversaw an alliance that included the AFL-CIO, the ACLU, the Teamsters, Code Pink, and Common Cause.