The Problem With Race Wars Among Minorities 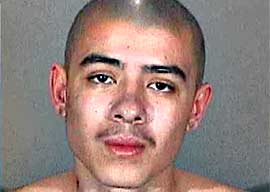 I can only guess that the reason you don”t hear much about black-versus-Hispanic violence in America is that you”re not supposed to hear much about it. It’s the sort of thing that swims upstream against the dominant narrative with the tenacity of a thuggish, heavily tattooed salmon. In the nation’s fevered movie dreams about racial violence, it’s white people (and only white people) who go about thrashing nonwhites (and only nonwhites). But in cities across the country”most notably, Los Angeles”one group of nonwhites is engaged in a prolonged, grinding, violent turf war with another group of nonwhites”and that’s something which is clearly NOT in the script. So it’s best for the crafty screenwriters to convince the dimwitted moviegoers that it’s not happening; failing that, they”ll squirm for a way to blame white people, anyway.

Early Saturday evening on January 31 at a shopping center in the majority-Hispanic LA suburb of Covina, CA, a Hispanic-looking young man who was wielding a huge kitchen knife was reportedly heard uttering anti-black racial slurs as he stabbed two black men and then fled the scene. Video surveillance footage briefly shows the assailant chasing his prey, who later stumbles back into camera view to reveal fresh wet blood splattered all over his shirt and pants.

Covina police arrested 19-year-old alleged Mexican gang member Louis Vasquez in connection with the stabbings. Vasquez had previously served time for auto theft and was arrested for the pair of stabbings a mere 17 hours after being released from jail on unrelated charges.

Citing the alleged racial slurs, police said they planned to investigate the stabbings as a hate crime. But when Vasquez was arraigned last Tuesday on attempted murder charges, there was no hate-crime enhancement. A prosecutor said she found insufficient evidence that the apparently unprovoked stabbings of two black men by a Mexican teenager whom witnesses said shouted racial slurs were racially motivated in the least.

The sinister-looking Lee Baca has been the LA County Sheriff since 1998. In 2008, he wrote an editorial for the LA Times called “In L.A., race kills“:

We have a serious interracial violence problem in this county involving blacks and Latinos. The truth is that, in many cases, race is at the heart of the problem. Latino gang members shoot blacks not because they’re members of a rival gang but because of their skin color. Likewise, black gang members shoot Latinos because they are brown….Gang affiliation does not matter. Only the color of the victim’s skin matters….I would even take this a step further and suggest that some of L.A.‘s so-called gangs are really no more than loose-knit bands of blacks or Latinos roaming the streets looking for people of the other color to shoot.

There are too many documented cases of black-v.-Hispanic violence for a sane person to deny that the phenomenon exists:

“¢ In a 2000 California gang initiation, members of a Mexican crew called the Avenues raided a black man’s basement apartment and shot him execution-style in order to earn their “stripes.” The event marked one of at least three suspected murders of blacks by aspirant Avenues members.

“¢ In 2002, a black California teenager named Kareem Williams was attacked in his front yard by members of the Pomona 12 gang, one of whom reportedly told Williams, “Niggers have no business living in Pomona because this is 12th Street territory….Pull out the gun! Shoot the niggers! Shoot the niggers!”

“¢ In May 2005 at LA’s Jefferson High School, black and Hispanic students “were involved in brawls for two weeks straight.”

“¢ In 2006 at a county jail north of Los Angeles, an estimated 2,000 black and Hispanic inmates clashed in a race riot that left one dead and several injured.

“¢ In 2006 in the racially tense Harbor Gateway neighborhood of LA, Mexican members of the 204th Street gang blew away a 14-year-old black girl named Cheryl Green as she sat near her scooter chatting with friends. Several others were injured in the shooting. Green’s mother claims her teenage daughter had recently penned a poem that included the lines, “I am black and beautiful. I wonder how I will be living in the future.”

“¢ In 2008 up to 600 black and Mexican students battled along color lines at South LA’s Locke High School.

“¢ In 2008, William Matthews, police chief of Coatesville, PA, claimed that “black-on-brown” crime was rampant in his rusty little town, with blacks routinely assaulting, robbing, and raping Hispanics, many of whom hesitated reporting the crimes for fear of deportation. “A segment of our community”the African American community”is preying on [Hispanic immigrants],” Matthews told a reporter.