The Problem With White Guys These Days 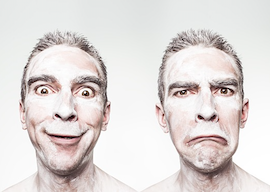 Hey, what the heck is wrong with white guys these days?

This is Jerrod Laber. He is 100% hu-white right down to the bone, from his blue eyes to his thin lips to his straight blond hair. But I suspect that if Jerrod were able, he’d crawl right out of his white skin and replace it with any pigmentation that was urine-colored or darker.

“White males in Generation Z aren’t that woke after all,” Laber bemoans in a Washington Examiner piece about how young white males are kinda, like, racist and sexist assholes just like their daddies and their daddies’ daddies were.

(In case you were unaware, “woke” is a term used by urban teens to describe a mental state in which one believes they are cognizant of how the world really works but instead wouldn’t have a clue if it slapped them in the face. Saying that someone is “woke” is a hip way of saying that they suffer from Dunning-Kruger effect.)

“The problem with white guys these days is that they think there’s something wrong with being white guys. Once they solve that problem, the rest will be a breeze.”

Laber says that white men—himself excluded, I’m assuming—are prone to racism and denial and delusions of persecution. He says nothing more of substance than that they’re bad people who should feel bad about this fact, which eventually will be the only way they’ll possibly feel good about themselves, although he can’t guarantee anything.

He says he wants to have an “honest discourse about race,” but I suspect that it’d take only about a minute of real honesty about race to have him melting like a candle.

Another white guy who has a problem with white guys these days is music critic Daniel Johanson. I’ve stared at his picture for an hour and still have no idea what this guy is. He says he’s white—actually, it’s more like he confesses that he’s white—but he must be using a very broad definition of the term. If I had to venture a guess, I’d reckon he’s part-Lebanese, part-Ewok. Still, he says he’s white, so I’ll do the decent thing and hold him accountable for every last sin of his forefathers.

Daniel recently penned a bold and trailblazing essay called “Classical Music’s White Male Supremacy is Overt, Pervasive, and a Problem” in some magazine I’ve never heard of before and hope to never hear of again. In Dan’s extended lamentation, he takes music made by white males in a white-male environment to task for being, you know, too white-maley.

Lest you get any weird ideas, Mr. Johanson wants to inform you that he is a white man but is NOT happy about it one bit:

As a white man, there have been and continue to be countless times in which I have needed to recognize that privilege, white supremacy, homophobia, toxic masculinity, and gender normativity are layered issues. It’s easy to call a Nazi a racist because they are so obviously a racist. Not all racists are willing to take up that mantle.

I gotta tell you: The way he describes it, it sounds positively exhausting to be a white man.

Have you ever met a black person that didn’t love opera music? I haven’t. And when I say that, I mean that I’ve never asked any black people about it. It’s one of those topics that you instinctually know not to raise with them because they’d probably laugh in your face.

“Recognizing that Classical Music has implied White Supremacy for centuries is hard for those that study the art form,” Johanson ululates. Actually, it’s easy to recognize for anyone who realizes that it’s almost exclusively a white male art form. You may get the occasional 65-pound chick from Asia who can play the hell out of a violin, but she’s merely an exception and a token and classical music is fundamentally a white-guy thing, which is why you wouldn’t understand.

Johanson’s piece referenced a recent Washington Post essay in which some white broad lamented that classical music was “white bread”—she actually used that phrase three times—and looked forward to a day when the classical-music scene became more “colorful” and wasn’t just “just devoted to works by the same white men.”

Again—these people seem to think that if your average urban black male is denied early exposure to the works of Vivaldi, he may lose all hope and turn to a life of crack cocaine and endless gunplay.

White men can’t seem to stop causing problems for others. Not only are they destroying classical music, they’re ruining the moods of black people across the country. Day after day, black bloggers openly scorn white men for harshing their mellow.

Over at the Good Men Project—which is a website that teaches the only good men are those who’ve been completely stripped of their manhood—a black man with the wonderfully Founding Father-y name of Franklin Madison scolds white males en masse for tryin’ to pull some bullshit and claim they ain’t racist. “You, White Males, Don’t Get to Define Whether You Are Racist or Not,” Madison lectures us white males in a manner that we would be racist for suggesting might not only be condescending, but also a little controlling.

“What’s it going to take for white men to start talking about race?” Madison asks.