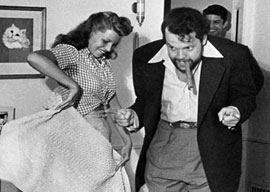 Last week I drove from Seville to Ronda, its great rival for primacy in the bullfighting world. Accompanying me was the noted son of that town, Cayetano Rivera OrdÃ³Ã±ez.

Cayetano, a former matador, has retired from bullfighting to move onto other projects, and I am slowly following suit. So it was serendipitous that we were both going to Ronda to be interviewed for a documentary on another figure in that world who lost most, although not all, of his love for it.

Orson Welles was a great aficionado of bullfighting and a close friend of Cayetano’s grandfather, the greatest matador de toros since Manolete, Antonio OrdÃ³Ã±ez. He was also a torero, the word we so badly translate as “bullfighter” (it isn’t a fight). Few people know that Welles trained and fought in Seville at age 17. (It was in his footsteps that I followed.)

He had arrived in Spain in the summer of 1932 while traveling Europe on an inheritance from his father, who had died two years previously. He took an apartment in the gypsy quarter of Triana for three months and became, in his own words, a torerito, a “little bullfighter,” although as he would later say in a BBC interview:

My short little period of doing it was just for the fun of it. As a kid, I didn’t think I was going to grow up to be the Belmonte of my generation.

It was immediately after this that he turned up at the historic Gate Theatre in Dublin claiming to be a Broadway star and talked his way into his first professional acting job. (I went the other way, trading the West End stage for Andalusian sand.)

Welles hung up his cape but went on to become a serious aficionado of the corrida de toros. However, by 1966 he was already beginning to doubt what underpinned foreigners’ love for the Spanish fiesta nacional, conjecturing that an American man obsessed with los toros might actually be “a voyeur, a peeker, a second-hand guy.”

Eight years after that he said of his own love for the fiesta in that BBC interview quoted above:

…I’ve seen too many hundreds of bullfights, thousands of them, I suppose, and wasted a lot of my life, now that I look back on it and although it’s been a great education to me in human terms and in many other ways….Wasn’t I living second hand through the lives of those toreros, who were my friends? Wasn’t I living and dying second hand? Wasn’t there something finally voyeuristic about it? I suspect my aficiÃ³n….Was it a waste, waste, waste? you asked me. A waste because I wasn’t doing anything. My life that I spent among bull breeders and bullfighters was enormous fun, but what have I extracted from it that’s of any value to anybody?

Of course, it is impossible not to see within this the embittered words of a man who at twenty-five produced, directed, co-wrote, and starred in arguably the greatest film ever made, Citizen Kane, and went steadily downhill from there with occasional flashes of brilliance: The Magnificent Ambersons, The Third Man, and A Touch of Evil.

However, I have since come to think there is another side to this. My last venture into the ring was a few weeks ago, with the very last lot of young Saltillo bulls and cows to exit the gates of my friends FÃ©lix and Enrique Moreno de la Cova’s ranch. On an emotional day for all, taking turns with my old maestro, the ex-matador Eduardo DÃ¡vila Miura, I stood, faced, and was taken apart by one res brava““fierce thing””after another. (The Saltillos are famously lethal.) And looking out over the fields, bloodied and bruised after a frankly abysmal performance, with all around praising my courage, I realized that I was in danger of becoming the worst sort of second-hand man myself.

After a few successful ventures into the ring that were more foolhardy than artistic, and with the more genuine success of the book I wrote on the topic, the world of the bulls embraced me and has continued to slap me on the back ever since.

However, what was I actually doing there pretending to be a bullfighter, pretending to be a figura in that extraordinary and alien world? Acclaim and praise is handed out in spades to a foreigner for merely getting in the ring, and getting your picture in the paper (seventh photo in the sequence) becomes a function of just turning up to watch.

Welles, as the newspaper archive evidence shows, had this multiplied to infinity. However, given that all his attempts at making films about the world of the bulls failed to get produced (like most of my attempts at writing and documentary making subsequent to that first book). What is anyone actually “making”? If being an artist is anything, it involves making things.

Welles either couldn’t admit to himself or couldn’t say out loud that the more pressing issue is not just becoming audience rather than artist, but in being fÃªted for just sitting in the stands and reveling in that. At this point one has slid from the morally and aesthetically questionable world of the voyeur to the far more reprehensible one of poseur.