The Secret Relationship Between Rahm and Lou 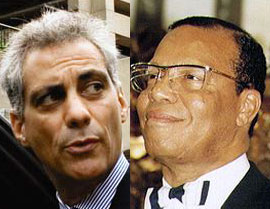 Chicago Mayor Rahm Emanuel, he of the tiny fingers and ballet costumes, has lately taken to speaking about “values.” Chicagoans are killing one another at a clip 40% higher than this time last year, and for the first six months of 2012, its per-capita homicide rate was nearly 400% higher than New York City’s.

Earlier this month Emanuel accused the city’s gangbangers of having the “wrong values,” at least when it came to killing innocent tots caught in their crossfire. “Get away from that kid,” he admonished the city’s thugs, sternly wagging one of his notoriously diminutive digits at them. “Take your stuff away to the alley,” he counseled, as if to imply it’s OK to shoot one another so long as their victims aren”t prepubescent. “And I don’t buy this case where people say they don’t have values. They do have values. They have the wrong values.”

Last Wednesday, after being informed that Nation of Islam leader Louis Farrakhan took to the streets with hundreds of crisply dressed henchmen to help patrol some of Chicago’s most violent ghettos, Emanuel gave an undersized thumbs-up to Farrakhan’s gesture, adding that “People of faith have a role to play” in helping curb the murder rate.

On the same day, Emanuel gave a thumbs-down to the Chick-fil-A restaurant chain, which is entangled in a national imbroglio due to its CEO’s relatively benign statements in favor of “traditional marriage“ based on his Christian beliefs.

“Chick-fil-A’s values are not Chicago values,” Emanuel scoffed. “They”re not respectful of our residents, our neighbors and our family members. And if you”re gonna be part of the Chicago community, you should reflect Chicago values.” Decrying Chick-fil-A CEO Dan Cathy’s “ignorance,” Chicago Alderman Proco Joe Moreno promised to deny the fast-food chain a permit to operate in the city’s First Ward.

“The Nation of Islam’s main beef with Jews isn”t necessarily that they”re Jewish, it’s that they see them as white.”

Ironically, Chicago officials had no problem permitting the Nation of Islam to reopen their Salaam Restaurant on the city’s south side earlier this year. It’s ironic because both Farrakhan and the Koran have said things about homosexuals that make the utterances of Chick-fil-A’s CEO, um, pale by comparison.

Before he fell under Elijah Muhammad’s spell and was bequeathed his “original” surname of Farrakhan, the man born Louis Eugene Walcott was a calypso singer and waxed a tune that would by modern standards be deemed “transphobic.” In a 1996 speech, Farrakhan alleged that “God don”t like men coming to men with lust in their hearts like you should go to a female.” At a Boston convention in 2004, he asked, “How can you be a Jew and promote homosexual marriage?” In 2009 he called homosexuality “a learned behavior” that was helping turn America into “Sodom and Gomorrah.” And just this May, he slammed Obama’s endorsement of gay marriage, dubbing him “the first president that sanctioned what the scriptures forbid.”

Regardless, a Google News search from yesterday morning yielded 6,570 results for “chick-fil-a” alongside “homophobic” but a mere five hits for “nation of islam” paired with “homophobic.”

Though some news outlets noted the hypocrisy in condemning Chick-fil-A while giving a free pass to the Nation of Islam when it comes to gay marriage, they were much more befuddled at the idea that Emanuel, Chicago’s first Jewish mayor and whose middle name is “Israel,” opened his arms and held out his itty-bitty hands to embrace a virulent anti-Semite such as Farrakhan.

Farrakhan says it’s inaccurate to label him a peddler of anti-Semitism, claiming that the Anti-Defamation League “uses the term…to stifle all legitimate criticism of the errant behavior of some Jewish people toward the non-Jewish population of the Earth.”

Still, he provides them with plenty of easily decontextualized sound bites. He once referred to Hitler as a “very great man” and has said that “the controlled media…is owned by Zionist forces.” He says Jews control the global banking system and “you can”t go nowhere in their world without paying obeisance to them.” Farrakhan says Barack Obama is a Zionist lapdog and has labeled him America’s “first Jewish president.”

Perhaps most troubling to those with an emotional and/or financial investment in maintaining the political narrative that blacks and Jews share a history of oppression and are thus brothers in arms against white hegemony, the Nation of Islam (NOI) has published three books detailing Jewish involvement in the black transatlantic slave trade. The first, 1991’s The Secret Relationship Between Blacks and Jews, ingeniously relied almost solely on Jewish primary sources. In 2010 the NOI published a second volume of The Secret Relationship alongside a new book called Jews Selling Blacks, which features 140 pages of newspaper ads from America’s slavery era where Jewish slave owners advertise the sale of black slaves as well as announce rewards for the capture of runaway Negroes.