The Seven Saints of October 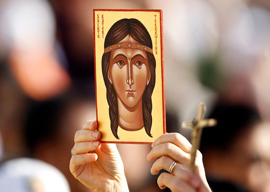 Having just gone through the third of the medicine shows we call presidential debates, it is something of a relief to go from the ridiculous to the sublime. For the Catholic, that means pulling one’s attention away from banal music and insipid sermons (to say nothing of pedophile priests and clerical gay-marriage advocates) to the saints. Seven more were added to their number by Benedict XVI on October 21, 2012.

When a person is canonized, it does not mean simply that the Pope liked their life stories. Nor is it a political statement, though beatifications or canonizations may annoy those in power. One remembers the government and media fury that greeted the elevation of Spanish, Mexican, and Chinese martyrs, Pope Pius IX, and Emperor Charles I of Austria to the altars.

But canonization in the Catholic Church is a rigorous process requiring several steps. The person’s writings (if any) and life are scrutinized carefully for any hint of scandal or heresy. Outside pressure can delay this stage, as has happened with the causes of Queen Isabel of Spain and Fr. Leon Dehon, whose memories have been attacked with charges of anti-Semitism.

“It is said that there is a different saint for every personality type and position in life.”

Once this stage is completed, the individual is declared to have lived a life of “heroic virtue” and is then given the moniker “Venerable.”

Now comes the spooky side of things. To prove the individual is in heaven interceding for the faithful, miracles (usually medical cures) must be proved to have come about through prayer to the person in question. For a cure to be deemed a miracle, doctors must certify that it was impossible according to modern medicine; non-Catholic doctors are preferred for this role today. In themselves, these things would be great fodder for paranormal cable shows. When one such miracle is approved, the individual is beatified; two more (though it may be reduced to one) and the ceremony of canonization ensues. Each one of the October Seven went through this process.

It is said that there is a different saint for every personality type and position in life. The current crop certainly fits this bill:

Fr. Jacques Berthieu was a Jesuit missionary in Madagascar who was killed by anti-French rebels for refusing to give up his faith.

Pedro Calungsod was a 17th-century Filipino lay catechist who went to Guam to assist a missionary. When pagans attacked, he refused to flee, dying by the priest’s side.