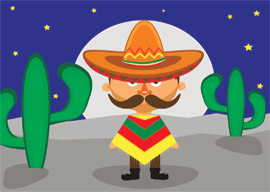 There are more Hispanics in America than blacks. Why aren’t they bitching about this year’s Oscars like blacks are?

Don’t misunderstand me, dearest friends”I’m glad they’re not bitching. Or at least it doesn’t seem like they are. They could be bitching all day and night in Spanish, and I’d have no way of knowing. It’s almost as if they occupy their own country within this country, you know?

But many black Americans these days seem quite happy to promote a culture of complaint. More and more I suspect that beneath every Steve Urkel lurks a Black Panther. Millionaire black activists are crying again, and I appear to have run out of Kleenex. In both fantasy and reality, there is nowhere on Earth that blacks have it better than the American media, yet still they gripe. Will Smith has taken the fact that he’s a boring black guy and milked it to the point where his Hollywood career has given him a net worth of a quarter-billion semolians. Yet this uppity ingrate has announced that due to the fact that none of the major acting nominees this year is a Negro, he and his wife Jada Pinkett-Smith will not be gracing this year’s Academy Awards ceremony with their coconut-scented presence. Spike Lee, that noble auteur and proud descendant of the pygmy peoples, has likewise dropped out.

“There are more Hispanics in America than blacks. Why aren’t they bitching about this year’s Oscars like blacks are?”

The Academy is so prejudiced against Bantus, they had selected black comic Chris Rock to host this year’s ceremonies. To show that he is not an Uncle Tom and to stick it to the industry that hates his skin color so much they chose him to host the Oscars, Rock is allegedly rewriting all his material for the show to reflect the unbearable lack of blackness among this year’s nominees. And on Friday, the Academy issued a hastily composed press release swearing up and down that it will take “HISTORIC ACTION TO INCREASE DIVERSITY.”

When they originally pitched “diversity” to us, they promised excitement and fun, not tedium and whining. This constant obsessive racial bean-counting is a form of insanity. What’s worse, most of the time they aren’t even counting the beans correctly.

But if we’re going to count beans, let’s count ‘em up right. What do the actual cold hard numbers show about which groups are underrepresented and (cough) overrepresented in American media?

According to a study by the Annenberg Center and Harnisch Foundation:

It’s Hispanics”who comprise about 17 percent of the population yet represent only 4.9% of film characters”who are severely underrepresented. If anyone has a right to whine, it’s them”that is, if whining is your idea of a good time.

Another study called “The Latino Media Gap” says the group’s presence in English-language American media has actually declined since the 1950s: