The Solipsism of John Edgar Wideman 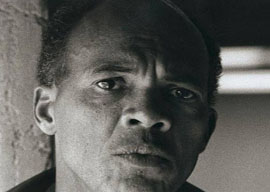 I hadn’t heard of John Edgar Wideman before reading his October 6 op-ed in The New York Times. Googling around, I see that he is the author of many books, both fiction (12 novels, six short-story collections) and nonfiction (memoirs, basketball, and social commentary). He is 69 years old, rather handsome in appearance, and African American with, I would guess from his pictures, about half-white ancestry”a mulatto.

I’m not going to beat myself up for not having read any of Mr. Wideman’s books. There are far too many books in the world and far too little time. In any case, his books seem to be about things which, with absolutely no offense to anyone at all, I’m just not interested in. Most seem to be about African Americans. In Sent for You Yesterday (1983), which got him a PEN/Faulkner award, he is “reimagining the black neighborhood of his youth.” Philadelphia Fire (1990), which got him that same award over again, is about “the 1985 police bombing of a West Philadelphia row house owned by the back-to-nature, Afrocentric cult known as “MOVE.””

Yeah, I remember MOVE, though they were not quite the guitar-strumming flower children suggested by “back-to-nature, Afrocentric cult.” MOVE was in fact a white-hating revolutionary and criminal gang that robbed, murdered, and generally made a major social nuisance of itself. Seeking violence, they sure enough found it when the police fire-bombed their Philadelphia headquarters, the event that inspired Mr. Wideman’s novel. Their most famous graduate is cop-killer Mumia Abu-Jamal, who in a just world would have died in the electric chair 28 years ago for the horrible, pitiless crime he undoubtedly committed. I’m guessing this is somewhat at odds with John Edgar Wideman’s point of view on the matter, but hey”po-tay-to, po-tah-to.

In any case, although I have not read any of Mr. Wideman’s books for the aforementioned reason, I did read that October 6 op-ed at a friend’s encouragement. My friend sent it to me with howls”I mean, e-howls”of disgust and exasperation. Sort of: “Read this piece of scheissdreck the Gray Ethnomasochist Lady has just puked out, then shoot yourself in despair.” Something like that. So I read it. Plainly I have not yet shot myself, but I still might after I’m through telling you about the piece and venting thereon. It will be a sacrifice on behalf of sanity, patriotism, and our children’s future. You’re welcome.

The gist of Mr. Wideman’s piece is as follows. He lives in New York City. He teaches at Brown University in Providence, Rhode Island. He rides the Amtrak train between the two cities. He boards early and takes half of a vacant double seat. En route the train fills up, but nobody sits next to him. Because he’s black!

“I’m a man of color, one of the few on the train and often the only one in the quiet car, and I’ve concluded that color explains a lot about my experience. Not that the situation doesn’t have advantages,” he allows. Unlike the fool crackers who are crushed and huddled together as far away from the black guy as they can get, he has an empty seat next to him where he can put his briefcase, papers, and snacks.

“Does John Edgar Wideman know anything about the world other than his own blackness?”

“But the very pleasing moment of anticipation casts a shadow, because I can’t accept the bounty of an extra seat without remembering why it’s empty….”

It’s empty because he’s black! And white people hate, or fear, or hate-‘n’-fear black people so much, they won’t take a seat next to one! Christlike, though, Mr. Wideman shoulders his cross, with compassion for those who shun him:

Then he remembers that Christ told us he came not to bring peace, but a sword. Just so with Mr. Wideman, who has fond feelings for MOVE’s gunslinging black nationalists. Time for a murmured threat to keep Charlie paying the Danegeld.

And quite dangerous, also, if left unexamined.

The fire next time! There is, however and alas, very little danger that Mr. Wideman’s solitary train rides will go unexamined”they or any other aspect of what I’d guess he would call “the black experience.” After all, here he is examining them at 600-word length on the The New York Times“ op-ed page.