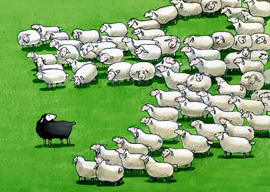 In the literal sense, the West triumphed in the Cold War. Nevertheless, a kind of creeping sovietization has overtaken it as if in revenge. I don”t want to exaggerate, or exaggerate much: We don”t yet fear the midnight knock on the door, we are still free to go where we like, and we are not obliged to spend much of our lives seeking everyday commodities of which there are perpetual shortages. On the contrary, abundance is so general that when we do not immediately find what we want, we feel a sense of grievance, as if our fundamental rights have been violated.

In what sense, then, are we being sovietized? I think the process is subtle and all the more insidious for that. I came to the conclusion when I traveled in what was then the Eastern Bloc that the ubiquitous propaganda was not intended to persuade, much less to inform, but to humiliate; for citizens (if that is the proper word for them under that system) had not merely to avoid contradicting it in public, but actually to agree with it in public. Therefore, from the point of view of the ruling power, the less true and more outrageously false the propaganda was, the better. For to force people to assent to propositions that are outrageously false, on pain of losing their livelihoods or worse, was to crush them morally and psychologically, and thus make them docile, easily manipulated, and complicit in their own enslavement.

Increasingly in our daily lives we find ourselves in analogous situations, especially if we have the misfortune to work for bureaucracies, whether governmental, quasi-governmental, supposedly independent, or commercial. We must not only keep silent about propositions that we find not only false but ridiculous, but assent to them, to show willingness and demonstrate that we are (to use a vile modern locution, redolent of a tyranny exercised over us) on message. The message must never be of our own devising, or indeed attributable to anyone in particular. It must be absurd and unassailable at the same time.

The other day I was reading a book by Sergei Dovlatov, The Invisible Book. Dovlatov was a Russian writer born in 1941 who immigrated to the United States in 1978 and died there of a heart attack in 1990. Possessed of a mordant wit, he was not much appreciated by the Brezhnev regime, though others suffered more than he. The Invisible Book is an account of his efforts to have a book published in the Soviet Union, efforts in which he failed completely, until he despaired and emigrated.

He wrote it in 1976, but it is well worth reading today, not only as a historical document but for what it tells us about our own situation: For ours is a golden age of ambitious mediocrity, if such an age can be called golden. And such was the underlying principle, never of course articulated, of the Soviet bureaucracy.

There is nothing wrong with mediocrity, of course. Virtually by definition, many of us are mediocre, and practically all of us are at best mediocre in most of what we do. We are mediocre sportsmen, mediocre critics, mediocre cooks, even mediocre shoppers. We are lucky if we excel at one thing, and when we meet people who seem to excel at everything that they do, we are inclined to fear, dislike, or even hate them more than admire them.

Mediocrity, then, is an unavoidable feature of the human condition; it becomes terrible only when, as is so often the case nowadays, it is allied to unbridled ambition and the urge to power. Mediocrity is no problem at all when it both knows itself and is content with the proper fate of mediocrity; it is harmful only when it wants to dominate.

Dovlatov managed to find work in various Soviet publications, though never for very long because he was always the little boy who noticed that the emperor had no clothes. When he describes the reigning mediocrity combined with ruthlessness, one has the uncomfortable feeling that one is not reading just about the Soviet Union, and that he was prophetic.