The Spooks of Hazzard 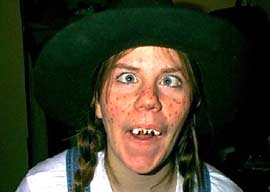 Only in America can white people organize an event intended to mock poor Southern whites, have black people crying that it’s racist against blacks, and then have white people apologizing to blacks about it.

That’s what happened in the small Arizona town of Queen Creek, whose black population is a hearty and robust one third of one percent. Back in May, as part of Queen Creek High School’s “Spirit Week,” the school sponsored “Redneck Day,” which principal Tom Lindsey claims was intended not to honor, but to satirize, po”-white Southern culture as exemplified in the frighteningly popular A&E reality show Duck Dynasty.

Duck Dynasty is part of a recent wave of TV shows that depict what used to be known as normal Americans as exotic and endangered creatures on a wild-game preserve, almost always for comic effect to amuse presumably sophisticated and non-prejudiced urbanites and coastal dwellers. Other shows in this genre include Here Comes Honey Boo Boo, Swamp People, Buckwild, and Redneck Island.

Seriously, someone should write a book about how poor white trash are the only group it isn”t considered culturally insensitive to mock. Not only aren”t such stereotypes discouraged”Hollywood’s masters of reality eagerly applaud and lavishly finance sweepingly negative cultural oversimplifications that in any other ethnic context would be labeled as hate speech.

On “Redneck Day” in Queen Creek, one student”apparently a Southern transplant”draped himself in a rebel flag, which nitpickers will remind you is often incorrectly referred to as a “Confederate flag.” He was asked to remove it, which he promptly did.

“Only in America can white people organize an event intended to mock poor Southern whites, have black people crying that it’s racist against blacks, and then have white people apologizing to blacks about it.”

And then came the backlash. Local black race hustlers were the first to pile on. The Southern Poverty Law Center, which should at least be honest and change its name to The Anti-Southern Rich People’s Law Center, stuck its hate-sniffing beak into the situation. And now the Department of Justice is investigating the school for possible civil-rights violations.

“We apologize to any people who, because of the word (redneck), were offended,” groveled the school principal. Mind you, he wasn”t apologizing to American whites of meager means”the untold millions whose forefathers came as indentured servants, whose ancestors died in the hundreds of thousands in the Civil War, and who have historically been pitted in economic and cultural competition against blacks ever since the original indentured servants were driven off the plantations and into the backwoods and hills”he was apologizing to black people.

Didn”t matter. The perpetually offended were out for a lynching, and they smelled blood.

Perhaps smelling money as well, civil-rights attorney Steve Montoya of Phoenix said, “The Confederacy represents the horrible institution of slavery, and that is a direct attack on African-Americans.”

“I”m sitting here crying and praying,” wailed Ozetta Kirby, vice president of a local NAACP chapter, whose grandson Marcus is a student at Queen Creek. “This thing really got to Marcus,” Kirby said. “No kid should have to go through that. We all know the connotation of “redneck.””