The Stench of Civility 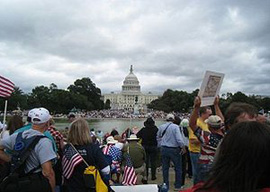 In January when a smirking schizoid goony loon who claimed no political affiliation sprayed hot lead on an Arizona crowd—killing six and injuring fourteen—the barking dogs of leftist punditry pounced like starving hyenas on the carnage, making raw political hamburger out of it. After two years of falsely depicting the Tea Party as a short-fused bomb waiting to explode into a blood-stained cum shot of racist violence, the left’s paid puppets rushed to the crime scene like the blind men of Hindu legend jostling to squeeze the elephant’s testicles until they burst. There was the predictably vomit-inducing pecksniffery about scary rhetoric, angry mobs, and how hateful speech has consequences. They saw no conflicts of interest in the fact that their own crowd had openly cheered for violence against people such as Sarah Palin and George W. Bush for years. When it became evident that shooter Jared Loughner was politically unclassifiable, there was a screaming silence when it came to apologies and retractions.

His nostrils flaring in pious indignation, Barack Obama flew to Arizona and exhorted Americans to “make sure that we are talking with each other in a way that heals, not a way that wounds” and to practice “more civility in our public discourse.” This is the same man who, while campaigning for president, told a crowd: “If they bring a knife to the fight, we bring a gun.”

A month after Obama’s speech in Tucson, leftist protesters assaulted a TV reporter in Wisconsin, and Massachusetts Democratic Congressman Michael Capuano told a Boston crowd, “Every once and a while you need to get out on the streets and get a little bloody when necessary.”

“If any sense is to be made of leftism at all, it is best understood as a perpetual-motion machine of guilt-projection.”

Late in August, serial California politician Maxine Waters, still under investigation for ethics violations, told an assembly of her whooping and awww-yeahing constituents, “The Tea Party can go straight to hell! And I’ll help them get there!”

On August 28, Indiana Democrat André Carson—one of only two Muslims in Congress—likened the Tea Party to a lynch mob: