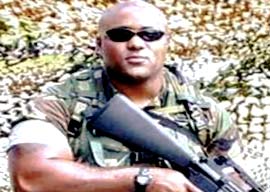 Chris Dorner thinks he’s a highly moral individual. A crusader for justice. A righter of wrongs. Maybe even a hero.

At least that’s the impression I get from reading the intense, sharply written, yet frequently absurd manifesto he allegedly posted on Facebook last week.

Dorner”AKA “Rambro,” “Blambo,” and “The Real Django””continues to elude authorities as of this writing. The ex-LAPD officer and former Navy Reservist is suspected of fatally shooting a civilian couple in Irvine, CA last Sunday, a mere two days after Dorner formally left the Navy. One victim, Monica Quan, is the daughter of a retired LAPD officer who”d defended Dorner in a departmental matter. Dorner is also suspected of shooting three police officers in Riverside, CA on Thursday, killing one.

As Dorner explains it, this was all a “necessary evil.” In his manifesto, he says that the killing will continue”not only of LAPD officers, but of their children. And they made him do it. He’s not responsible.

All this killing will be justified, according to Dorner, because he once saw a fellow LAPD officer kick a schizophrenic and he once heard a pair of LAPD cops (who, judging by their surnames, were Mexicans) refuse to apologize for saying the word “nigger.”

“Beware of authority figures, active or retired, with guns in their hands.”

Dorner is a man with many grievances. His manifesto mentions incidents both in childhood and adulthood where he was either called a nigger or he heard someone use the word nigger, and both times he responded with violence. He saw and approves of the recent kill-whitey cinematic bloodfest Django Unchained. A huge part of his rapidly evolving public persona is centered on the idea of justified black rage. His case recalls that of Nkosi Thandiwe, who murdered a white woman and said his anthropology classes taught him that white people were uniquely evil and that he was trying “to spread the message of making white people mend.” It recalls that of Omar Thornton, who shot up a Connecticut beer distributor’s building in 2010 and in the process killed eight people, including “five racists.” It harks back to that of Colin Ferguson, who blew away six commuters on the Long Island Rail Road in 1993 and propped up his legal defense on the idea of black rage.

Most troubling”at least, I guess, if you”re white”is what appears to be his huge level of support among blacks. According to one Tweet, “Every black man I’ve talked to thinks Dorner is a hero!” And he may have accomplished this feat merely by running and hiding behind the word “nigger.” It’s an emotionally charged word. Nigger”that’s the trigger. Ever since the OJ Simpson murder trial, when defense lawyers successfully shifted the focus to whether or not a white cop may have once said “nigger,” saying that word is in many circles considered worse than murdering someone.

Dorner says his killing spree will also be justified because the NRA’s Wayne LaPierre didn’t show sufficient sympathy for the child victims of Sandy Hook. To achieve justice, Dorner wishes the following upon LaPierre: “May all of your immediate and distant family die horrific deaths in front of you.”

Dorner also disagrees with homophobes to the point where he wishes torture upon them: “Westboro Baptist Church, may you all burn slowly in a fire, not from smoke inhalation, but from the flames and only the flames.”

When it comes to “justice,” I get the sense that Christopher Dorner leans a touch toward overkill. He recalls the famous dictum attributed to Goethe: “Beware of those in whom the urge to punish is strong.” To that I think we can safely add, “Beware of those who think they”re teaching you a moral lesson by wantonly killing people.” And also “Beware of authority figures, active or retired, with guns in their hands.”

Amid all the endless yabbering about “gun culture” in the wake of Sandy Hook, little attention is paid to the idea that military and police institutions often create, or at least enable, psychopaths who really know how to use guns. Why should we trust our government with guns when they churn out people like this nutjob?