The Suspect Said He Wanted to Kill White People 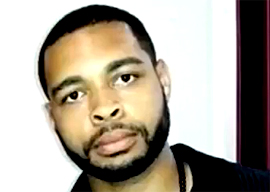 I often marvel at the magical mystical soothsaying ability of self-proclaimed reporters who were likely hundreds if not thousands of miles from the crime scene yet are able to know not only precisely what happened, but also exactly why it happened.

The Daily Mail also reported that in both cases, the victims “were shot by white police officers.” The Huffington Post said that the victim in Louisiana was “unarmed.”

In a nation already well beyond Race Crazy, this news, however nonfactual it may have turned out to be, did not bode well.

Last Thursday during a Black Lives Matter “peaceful protest” in Dallas, a black Army vet who was obviously sympathetic to BLM’s cause decided to “protest” by shooting five police officers dead as well as injuring seven other cops and two civilians.

As our countless friendly Negro readers are fond of saying, shit just got real.

Democratic politicians did not wait for the blood to dry before definitively stating that the two police shootings of black victims were racially motivated. But they didn’t say anything about the Dallas massacre being racially motivated.

“Here’s a case where the shooter comes right out and states his motive”he wanted to kill white people. But what is the media narrative? White racism caused all this.”

Regarding the shooting death of Alton Sterling in Baton Rouge, LA, Hillary Clinton leaped to politically expedient conclusions and belched the following thoughts from her twat:

Something is profoundly wrong when so many Americans have reason to believe that our country doesn”t consider them as precious as others because of the color of their skin.

Our soon-to-be-ex-president Barack “Blowfly” Obama flaulated thusly from his mouth:

When incidents like this occur, there’s a big chunk of our citizenry that feels as if, because of the color of their skin, they are not being treated the same….This is not just a black issue, not just a Hispanic issue. This is an American issue that we all should care about.

“This is not just a black issue?” Apart from the fact that the two shooting victims were black, where’s the proof that it’s a black issue at all?

Extrajudicial deaths of men, women and children at the hands of police have never been this widespread in the history of America.

Is that true? Of course not! Police shootings of unarmed black men in the USA are down from around 100 a year in the 1960s to about 35 yearly these days. Taking into account the fact that America’s black population has roughly doubled in that timespan, on a per-capita basis, police shootings of black men have plummeted around 80% since the 1960s.

Kindly allow me to spotlight some of the details of what happened last week that may have escaped your attention.

Despite being described by friends and loved ones as a “sweet person” and a “respected man,” Louisiana’s Alton Sterling was a convicted pedophile. He’d also been previously arrested for public intimidation, aggravated battery, possession of a stolen firearm, burglary, and, ominously, resisting arrest. Contrary to some reports, police did not confront him for selling CDs, but because a homeless man had called 911 to report that someone matching Sterling’s description had threatened him with a gun outside a convenience store. A pair of white cops originally tased him and wrestled him to the ground as Sterling continued to struggle. One officer fell under the impression that the suspect was reaching for a gun, whereupon he shot Sterling dead in the chest. Immediately after the shooting, an officer reached into Sterling’s back pocket and removed a gun. Graphic video footage of the shooting can be viewed here and here.

Despite being described by associates as “one of the softest-spoken people you’ve ever met” and “a very even-keeled man” who had “a cheerful disposition,” Minnesota’s Orlando Castile apparently identified as a Crips gang member who in 2011 wished his Twitter followers a “Merry CRIPmas and happy BLUE year !!!!!”

He also fit the description of an armed robber who’d pulled off a heist at a Super USA Convenience Store four days before and about four blocks away from where a Hispanic”not white”cop named Jeronimo Yanez would shoot him dead. Despite initial reports that police had stopped”and killed”him over a broken taillight, video taken after the shooting shows that both of his taillights were working just fine. And according to a police scanner recording, Officer Yanez told the dispatcher:

I”m going to stop a car. I”m going to check IDs.  I have reason to pull it over….The two occupants just look like people that were involved in a robbery….The driver looks more like one of our suspects, just “cause of the wide set nose.

Well, whaddaya know? The only reason that skin color comes into the picture is because the driver fit the description of a black man who’d pulled off a nearby robbery only days earlier.