The Tenacity of Mendacity 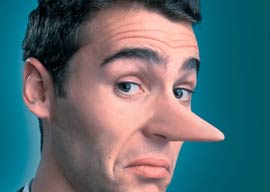 False allegations about the propaganda technique known as the “Big Lie“ have been repeated ad nauseam to the point where, with eye-gouging irony, it has all congealed into a fresh new Big Lie of its own.

Two Democratic Party spokespeeps recently perpetuated the astoundingly pervasive myth that Hitler and Goebbels openly advocated deceiving the public, which, if you pause three seconds to think about it, wouldn”t be the wisest strategy for any politician to publicly espouse.

In an interview with the San Francisco Chronicle on September 1, John Burton, chairman of California’s delegation to the DNC, accusing Republicans of marching in Goebbels’s alleged footsteps:

They lie and they don”t care if people think they lie. Joseph Goebbels. It’s the big lie, you keep repeating it.

“A fundamental flaw of human psychology, at least at this point in evolution, is that people prefer to embrace lies than to admit they can be fooled.”

It’s like Hitler said, if you”re going to tell a lie, tell a big lie, and if you tell it often enough and say it in a loud enough voice, some people are going to believe you.

The true Big Lie here is the implication that Hitler or Goebbels ever publicly endorsed such a method. You”ll see this asserted hundreds of thousands of times across the Internet’s vast caverns, but you”ll never see it traced to a source document. The truth”at least according to their own documented words”is that Hitler and Goebbels criticized their enemies for employing Big Lies.

In Mein Kampf, Hitler accused Jews of using the Big Lie, which he specified was a mega-fib that Jews comprise members of a religion rather than a race. And the only instance I could find of Goebbels ever mentioning the Big Lie was in a 1941 article where he accused the English of practicing the technique.

Unsurprisingly, this accusation cuts both leftward and rightward. It’s frequently asserted that Vladimir Lenin said, “A lie told often enough becomes the truth,” but I was unable to find a primary source for that quote. It’s also been alleged that Saul Alinsky wrote that “Lying is never wrong as long as it leads you to a position of power” in his book Rules for Radicals, but a perusal of that document online shows it’s nowhere to be found in Alinsky’s text.