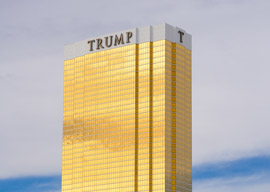 I don”t like Donald Trump on the First Amendment, don”t trust him on the Second, and positively loathe him on eminent domain. I covered that here at Taki’s in October 2012, when I was also still pissed at Trump for firing Adam Carolla on The Apprentice.

He’s vowed to bring manufacturing back to America just as corrupt, collectivist labor unions were finally in hospice; I grew up in a steel town, in the “70s”I dread spending what’s left of my life hearing “Take This Job and Shove It” on an endless loop once millions of Americans suddenly remember why they hated that type of work in the first place. (With the added “bonus” of having to pay more for”or go without”all the stuff they used to buy so cheaply at Costco and Walmart, presuming they stay in business.)

I”m afraid he”ll turn the Map Room into the Hall of Mirrors in Versailles.

But if Donald Trump wins the presidency in November, I will literally fall to my knees and weep with relief.

I”m not proud of that. I hate feeling propelled, rather like a cat in heat, by a toxic cocktail of shallow novelty-seeking and primitive tribalism. As a conscientious, civic-minded reason to cheer a presidential wannabe, “He annoys all the right people” ranks somewhere between “It’s just time for a change” and “This”ll teach the bastards a lesson.” I know.

“Being temperamentally contrarian has never been this tough to manage.”

I thought we were going to nuke Afghanistan, not build schools for inbred pedophiles with no written language”or worse, let them and their ilk into the country. I agree with Derb that “the most amazing, astounding, astonishing statistic of the 21st century is that the annual rate of Muslim immigration into the U.S.A. increased after 9/11.”

Meanwhile, millions of low-IQ Mexicans stream across your southern border, bringing their well-documented attitudes about rape, animal cruelty, drunk driving, and litter. (Can you people really not mow your own lawns or build your own decks? A serious question for another time…)

Now, switching from grapes to cotton: I figured that after Americans got electing their first black president out of their systems, they”d return to their senses”not hand the fool a second term.

The political correctness my anarchist pals and I wrote off in the late “80s as an irritating passing fad on a par with Cabbage Patch Dolls has become, along with certain varieties of mental illness, enshrined in public policy and entrenched in quotidian intercourse.

Being temperamentally contrarian has never been this tough to manage. That is, I despise all the elitist snobs who denounce Trump and his followers for transparently classist reasons”but when too many people I like started liking him, I reflexively flinched as well.

One of those people is paleolibertarian Ilana Mercer, whose new book is The Trump Revolution: The Donald’s Creative Destruction Deconstructed. In terms of Trump’s foreign policy, the “paleo” is a good fit, but surely the “libertarian” in Mercer balks at his tariff talk, right?

In the book, Mercer joins the growing chorus explaining that what we”ve been calling “free trade” at least since NAFTA is neither.

“Trump simply wants to make these agreements and organs work for the American people,” she writes, adding that “libertarian post-graduate cleverness deserves to be questioned” on these matters. Man cannot live on well-thumbed, marked-up copies of Economics in One Lesson alone, I guess.

But my pet issue is free speech, and on that I simply can”t abide Trump. Not when his gut reaction to the aborted terror attack on an exhibit of “Muhammad cartoons” in Garland, Tex., was basically “Why draw pictures like that in the first place?”