The Ugliest Yacht in the World

Friedrich Nietzsche observed, “it requires more genius to spend than to acquire””making money being a question of diligence and cunning, wasting it a matter of taste. When the great philosopher wrote these words, he was actually concerned with the pervasiveness of the ascetic ideal among the capitalist elite: “The most industriousness of all ages”ours”does not know how”¨ to make anything of all its industriousness and money, except”¨always still more money and still more industriousness.” Work, work, work with nothing to show for it.

Nietzsche never considered what horrors might ensue if those industrialists stopped delaying satisfaction until death and started lavishly spending their gains.

The 390-foot vessel, sheathed in white, had a knifelike hull and a three-story, bulbous watchtower. Some guessed it was a radar-deflecting warship, given its smooth lines and wraparound tinted windows. Others speculated that it was submersible.

The boat’s only identifying marker was a single letter emblazoned on the stern: “A.” 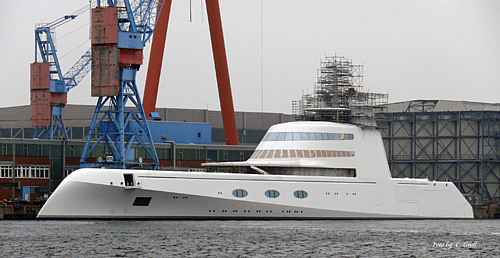 The ship is repulsive from stern to bow.

Mr. Melnichenko’s oversized bed, perched at the top of the tower, rotates on a giant turntable (with built-in entertainment systems) to give him better views out of the panoramic windows. Along with its two swimming pools”one in the front and one in back—A sports a helipad, a hovercraft and a garage for the owner’s car. The ship, which has a crew of 35, has more than 100 audio speakers, and more than a dozen plasma TV screens, many of which are disguised as mirrors. Guests in any of the rooms can watch DVDs from a centralized library of more than 2,000 titles.

Melnichenko just so happens to be married to this woman, who, no doubt, fell in love with him due to his impressive DVD collection.

Not only is the vulgarian in question incapable of spending properly, but he doesn”t even seem to possess many of the virtues of industry and hard work. The 36-year-old’s success story is much like that of the rest of Moscow’s billionaires: he founded his banking concern in “93 during the great apparatchik-directed wealth transfer and has since been linked to money laundering and the Russian mafia“”If you have many clients and you want to have good relations, you don’t have time enough to control all of it and there is a risk of error.’’

To help clear our minds of Andrey, it’s worth re-reading Taki’s chronicle of his maritime journey, an account as charming as Melnichenko’s yacht is vomit inducing. Taki shows how wealth is done right.

The Marxian Left is constantly frustrated by the fact that the lower orders don”t look upon the extravagant spending of the well-healed and instinctively, immediately revolt, or at least demand massive wealth redistribution. Worse still, those plebs are often fascinated with the rich’s excess.

The fact that the poorer people (or at least the decent sorts) have never consistently gotten taken up in political class warfare has much to do with the utter unattractiveness of Marxian ideology. But then it also speaks to a certain instinct in us all to admire those above us, to affirm hierarchy as actually attempting to make it all come crashing down would cost us own lived reality.

Sure, Taki’s journey at sea, and his exploits on the Judo mat and in many a boudoir, might make the Third Estate a bit envious. But then the man’s life remains enchanting in that it offers a vision of an aristocratic vitality and insouciance. The best of us hope that if we ever inherited great wealth, we wouldn”t become philistine monsters but act much like Taki”or at least I imagine myself playing as an amateur at Wimbledon, hobnobbing with the aristocracy of Europe, and, let us say, sinning well.

In this way, Andrey Melnichenko’s hyperbolic vulgarity isn”t just an expression of bad taste but an almost compulsive admission that his wealth is ill-gotten, that he shouldn”t be on top and better just spend it all on some ridiculous ornament before the rest of the world catches on and puts him in his place. To the little people, Melnichenko’s stutus appears as the product not of breeding or industry but of chance“or worse, error and malfeasance.

The sight of Melnichenko vessel might not actually inspire a proletarian revolution, but then wealth without class deserves to be overthrown. At least, this privileged reactionary has a desire to reach for a pitchfork when I look at that stupid boat.