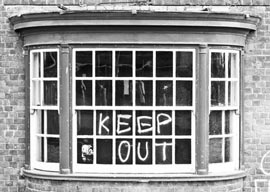 There is a strange thing about modern ugliness: It is militant and proselytizing, and not just the result of thoughtlessness, poverty, lack of skill, and so forth. It might properly be called ideological. It is not so much the result of bad taste as of opposition to good taste as a desideratum. I have often noticed this before, but I was reminded of it powerfully when I opened my French newspaper the other day and saw a revealing juxtaposition”revealing, whether intentional or not.

The headline said “Europe [meaning the European Union rather than the geographical expression] is a necessary utopia for the left,” and the article beneath was an interview with the seemingly eternal and indestructible student revolutionary Daniel Cohn-Bendit. The large photograph that accompanied the interview was of Exarchia Square in Athens, described in the caption as being in a bohemian and oppositional district.

The picture showed a building in the best fascismo-concrete style originated by Le Corbusier, its hideous structure covered”I cannot say defaced, for that implies a surface whose appearance can be much worsened from its original state”with scrawled graffiti. It was a sight of such appalling and inhuman ugliness that blindness itself would be a blessing by comparison.

“So long as there is squalor in the world, those obsessed with social justice feel obliged not only to live in it themselves but also to spread it evenly.”

For anyone with minimal aesthetic sensibility, this picture resembles hell more than utopia, but a world of such ugliness is nevertheless a kind of utopia for those who value what they call social justice above all other considerations, for while ugliness is democratic, being within the reach of all, beauty is aristocratic or at least elitist, being available to only a minority even in the best of circumstances.

There are other advantages to ugliness over beauty. It requires no effort and no maintenance, for example; it increases with neglect. Beauty, on the other hand, imposes a discipline and a restraint on those who would have it. This includes dress, of course; on the back page of the same newspaper was a picture of a campaigner for a more economical use of energy (not a despicable aim in itself), who was dressed”as a matter of principle, one suspects”as if he had just fallen out of bed after two hours” sleep after an all-night party.

So long as there is squalor in the world, those obsessed with social justice feel obliged not only to live in it themselves, at least for a time”an elementary matter of solidarity with those less fortunate than themselves”but also to spread it evenly. Beauty has ever been associated with inequality, much of that inequality illegitimate even from the point of view of the most reactionary of inegalitarians, indeed the product of the most blatant or brutal exploitation or despoliation. And whereas beauty for all seems an impossible target, ugliness for all is easily within reach. I once lived in one of those ugly cities, formerly industrial, in which England abounds to an extent unknown in any other Western country, whose one gracious area, full of early-19th-century houses built for the nascent industrial bourgeoisie, was comprehensively ruined by the construction of so-called social housing in the midst of it, destroying it once and for all. It was difficult not to believe that the very purpose of this construction was to destroy the beauty in which so small a proportion of the population lived, since there were many other places in which the social housing, a kind of battery farm for social pathology, could have been built. Until, then, all can live in beauty”an impossibility”none shall. Justice, by which is meant equality of outcome”demands the universal spread of grunginess, the destruction of all outward forms of distinction. The utopia of those obsessed by social justice is a kind of ascetic libertinism: ascetic with regard to outward appearances, libertine with regard to personal conduct.

There is such a thing as ascetic or austere beauty: It is one of the things that I like about Spanish architecture of a certain period. But the asceticism of the enthusiasts for social justice goes much further or deeper than this Spanish asceticism: It forbids even aiming for beauty, in the certainty that such an aim would either increase injustice”inequality”into the world, or reintroduce it once it was eliminated. So everything must be subjected to the same uglifying impulse: Exarchia Square as pictured in the newspaper is therefore a model to be emulated rather than a warning of what is to be avoided. A world of large, crumbling concrete buildings covered in graffiti”such is the urban ideal that the newspaper suggests to its largely social-justice-obsessed bourgeois-bohemian audience.