The Wages of Pathological Altruism 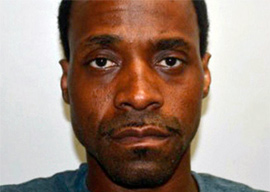 Here’s what I know about Kori Ali Muhammad:

First off, he’s black. He can”t shut up about it. He’s one of those latter-day American blacks who has his head so far up his ass sniffing his blackness, he fails to see all the sunshine this white world has to offer him. Even Hitler wasn”t as obsessed with being Aryan as Kori is with being black. After all, every once in a while, Hitler ate vegetables and played with his dog.

Last summer, Kori praised the black killer of five white police officers in Dallas, claiming in the inimitable all-caps style of the ideological psychopath that “HE LOVED US ENOUGH TO KILL AND DIE FOR US.” Ripping a page from the moronic Nation of Islam doctrine that white people were created by an evil black scientist named Yakub, he warned on Facebook that natural disasters would soon wreak ecological terror on the sons of Yakub:

Kori Muhammad filmed himself laughing at the idea that melanoma would wipe out the white race. An aspiring rapper”aren”t they all?”he recorded a song about how the grafted white devil skunks would meet their maker soon.

“I wonder if, during that awful split-second before he got shot, it occurred to him that maybe “Nazis” weren”t the biggest threat to him and his family.”

According to police in Fresno, CA, on Thursday, April 13, Muhammad shot and killed a Motel 6 security guard because, in Muhammad’s own words, the guard “disrespected” him. A Fresno news station describes shooting victim Carl Williams as white, but I think they need new glasses.

Police say that Muhammad told them that after killing Williams, he went into hiding to perform voodoo rituals. Last Tuesday, after going online at a local Starbucks and learning that he was the prime suspect in Williams’s murder, Muhammad made a decision”he was going to kill as many white men as possible, because that’s much more glorious than going down in the history books as merely as the killer of a Motel 6 security guard.

Armed with a gun and roaming through Fresno looking for white men to slay, Muhammad reportedly chanced upon a Pacific Gas and Electric Co. truck. Seeing that the driver was Hispanic, he instead chose to shoot and kill the white passenger, Zack Randalls.

Muhammad kept walking and then allegedly fired two rounds at another white man, missing him.

He then fired at a car but stopped the moment he realized its passengers were two Hispanic women.

Hunting for more white men, he found 37-year-old father of two Mark Gassett, shot him to the ground, and then stood over him and shot twice more, killing him.

His last victim was a fifty-eight-year old white man who”d gone to a local church for a free meal from Catholic Charities. Muhammad allegedly murdered him in the church’s parking lot.

Police apprehended Muhammad before he could kill anyone else, and he reportedly shouted, “Allahu Akbar!” upon being arrested. (He would later tell police he hadn”t been to a mosque in years and actually worshiped seven gods”primarily Aguna, a serpent-mother goddess from the Solomon Islands.)

According to Fresno police chief Jerry Dyer, Muhammad has confessed to all four killings and was quite frank about his motive:

Obviously not the brightest bulb on the Kwanzaa tree, Muhammad called Fresno’s CBS Eyewitness News from jail to confess to both the crimes and his motive:

Surprisingly, even outlets such as the Los Angeles Times and CNN are admitting that the murders were racially motivated. Unsurprisingly, CNN ran an editorial claiming that, OK, hey, after giving it some thought, maybe this whole idea of “hate crimes” is a bit silly since you can”t prove someone’s murders were racially motivated, and, y”know, murder is already a crime, so no need to go charging this guy with a hate crime, because that would be unnecessary and kinda dumb.

Flabbergastingly, a CBS outlet in Sacramento decided to tiptoe over the fact that a black male had just admitted killing white men because he hated them to instead focus on shocking allegations that Muhammad’s family was being racially harassed in the wake of the killings.