The War on the Way We Were 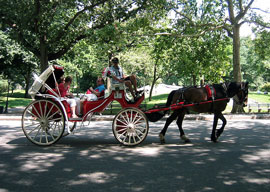 When I first heard that the newest mayor of New York’s first action in office was to denude the city of horse-drawn carriages, I thought it was probably a joke. I figured some card over at Fox News or The Wall Street Journal had taken an obscure quote out of context in order to start His Honor out on the wrong hoof.

Alas, Bill de Blasio actually is that stupid. Failing schools, unfunded pensions, and random violence are not at the top of his to-do list as one of the most prominent personages in the nation, if not the world.

De Blasio decries the horses’ treatment as inhumane. Not only does he fail to appreciate problems (or economies) of scale, he seems also ignorant of differences in our animal kingdom. What is onerous to a human is not to a horse. Shoeing tools may appear gruesome, but it is not worse than clipping fingernails is for us.

Still, de Blasio’s idiocy is reminiscent of other foolishness that ensued when politicians attacked cultural icons.

It recalls a campaign that sought to drain the vintage riverboat industry. At the beginning of the millennium there were still several passenger steamboats in operation, most replicas of newer construction. Conversely, the most authentic and best known of the genuine ones was the Delta Queen.

“Cultures are killed by curtailing their traditions and eviscerating their symbols.”

Built in the 1920s, it was lavishly constructed and saw service everywhere from the Sacramento River to the mighty Mississippi.

However, in 1966 Congress became signatory to the Safety of Life at Sea act which threatened this tether to our past. Due to the ship’s construction and the fact that builders did not foresee the contemporary mania for protection from all risks of any kind, the Queen was reduced to pleading yearly exemptions from the law.

Even so she was named to the National Register of Historic Places in 1970 and subsequently declared a National Historic Landmark in 1989. Well, we see how contemporary men treat their treasures.

By 2008 owners of the vessel announced that service would end due to the failure of Congress to grant its annual exclusion. One of the most vociferous opponents of the boat’s heritage was Rep. Jim Oberstar of Minnesota, who claimed his opposition was predicated on the inherent dangers of wooden craft.

Left unaddressed was why if riverboats were such a hazard there had been no deaths reported due to crew negligence or structural deficiencies for more than a decade. Meanwhile, in 2008 alone (the year of his pompous crusade) there had been 455 traffic fatalities in Minnesota.

Only after five years of lobbying (and Tea Party victory) were bills heard to excuse the Delta Queen from draconian restrictions that docked her. In September of 2013 the House of Representatives passed legislation that is currently stalled in the Senate for what should be an obvious vote. This is yet another example that one’s intelligence quotient doesn’t rise no matter how high one rises in office.