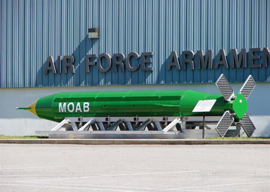 “MOTHER OF ALL BOMBS” ACCUSED OF SEXISM
Fulfilling Donald Trump’s campaign promise to “bomb the shit out of“ ISIS, US forces dropped an 11-ton Massive Ordnance Air Blast (MOAB) bomb on an Islamic State stronghold in eastern Afghanistan last Thursday. The largest non-nuclear weapon ever used in combat, the MOAB is also referred to as the “Mother Of All Bombs.” On Twitter, a self-described “social justice” and “diversity” expert named Eric Stoller griped that the nickname was hurtful toward women, whom we suspect he doesn”t fancy sexually but aligns with ideologically in the eternally righteous battle against straight white men:

It’s grotesque to call a killing device, the “Mother of All Bombs.” The #MOAB is the epitome of lethal patriarchy.

We suspect that if the massive phallic explosive device had been nicknamed the “Father of All Bombs,” Mr. Stoller would have blamed that on the patriarchy, too.

Stoller is also shameless enough to refer to himself as a “thought-leader.” Here’s a thought: Stoller, you”re the Daughter of All Sissies. It’s unflattering to spend your entire life fighting a bitterly vengeful imaginary war inside your head against the bullies who beat you up in grade school.

“TOMAHAWK MISSILES” ACCUSED OF RACISM
Following in Eric Stoller’s tradition of accusing inanimate military devices of unforgivable sins, Mother Jones editor-in-chief Clara Jeffery“whom, it must be noted, is a rather plain specimen of the fairer sex”sent a giant Virtue Smoke Signal to America’s Injun community with the following tweet:

“It appears that the masked minions of George Soros may have bitten off far more than they can chew.”

Paleface squaw speak with forked tongue to make heap big nonsense. She smokum too much from peace pipe.

ANTI-GAY CONCENTRATION CAMPS IN CHECHNYA?
From the Russian republic of Chechnya come lurid tales that gay males are being “rounded up” into the “world’s first concentration camp for homosexuals since Hitler’s in the 1930s where campaigners say gay men are being tortured with electric shocks and beaten to death.”

At least once a day, Adam’s captors attached metal clamps to his fingers and toes. One of the men then cranked a handle on a machine to which the clamps were linked with wires, and sent powerful electric shocks through his body. If he managed not to scream, others would join in, beating him with wooden sticks or metal rods.

Tatiana Lokshina, spokeschick for Human Rights Watch in Moscow, says that the “camps” do not exist, but she claims that police are indeed rounding up gay men in the Chechen Republic and routinely torturing them in “holding facilities.”

Chechen authorities have repeatedly denied that gay men are being abducted and tortured, but they offer a uniquely delightful alibi”they deny that there are any gay men in Chechnya. “You cannot detain and persecute people who simply do not exist in the republic,” said government spokesman Alvi Karimov.

Amid all the outrage from the Western press about this story, rarely is it mentioned that Chechnya’s population is 95% Muslim.

On Saturday, the Huffington Post took the article down:

We have done this because the blog submission from an individual who called herself Shelley Garland, who claimed to be an MA student at UCT, cannot be traced and appears not to exist.

We assume it was a white male who posed as “Shelley Garland,” and we would like to buy him lunch.