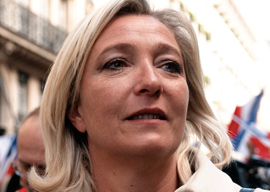 The Week’s Most Hurried, Worried, and Curried Headlines

FRANCE VOTES ON WHETHER TO COMMIT SUICIDE
Today French voters go to the polls in the first round of their presidential election. The outcome may determine whether France still has a chance of remaining French.

Almost as if he was singlehandedly trying to hand National Front candidate Marine Le Pen the presidency, on Thursday evening a gunman named Karim Cheurfi shot three police officers and a female tourist with an AK-47 on the Champs-ElysÃ©es near the Arc de Triomphe. One officer”who in a bitter stroke of irony had served on-scene during the Bataclan Massacre in Paris of November 2015″was killed, while the other three victims survived their wounds.

Cheurfi had previously served fifteen years in prison for attempting to kill two police officers. As recently as this February, he was detained briefly after making new threats to kill police. Although he was found with knives and masks, he was released after he told investigators they were costume props for “a carnival””and the idiots took him at his word.

ISIS claimed responsibility for the attack.

France’s four presidential candidates”three assholes and Marine Le Pen”were debating nearby the shooting on live TV while it happened. The next day, she called France’s current socialist president Francois Hollande “notoriously feeble“ and derided the establishment left and right as “naÃ¯ve” regarding the Islamist threat:

We cannot afford to lose this war. But for the past 10 years, Left-wing and Right-wing governments have done everything they can for us to lose it.

As election results roll in later today, it will become apparent whether France still has a will to survive.

“The outcome may determine whether France still has a chance of remaining French.”

BERKELEY MAYOR UNMASKED AS ANTIFA SYMPATHIZER
Jesse Arreguin is the fat, brown, and gay-looking Mayor of Berkeley, CA, cradle of the Free Speech Movement but now the most steadfastly anti-speech burg in the nation.

While masked Antifa goons in Berkeley have attempted to “shut down” anyone to the right of Leon Trotsky in recent months”burning and throwing bricks and tossing M-80s and beating Trump supporters unconscious and knocking Trump supporters in the head with bike locks and pepper-spraying female Trump supporters“Berkeley’s police force has remained suspiciously inactive. It’s almost as if they”ve been told to let Antifa (here’s how to pronounce it) have their way like a parallel-universe set of brownshirts.

Now comes news that Arreguin supports the violent leftist terrorist group BAMN (By Any Means Necessary) whose leader Yvette Falarca was filmed on camera violently attacking a Trump supporter last summer but still miraculously retains her job as a middle-school teacher. Arreguin and Falarca are mutual “friends” on Facebook.

As opposed to the defanged Berkeley police, cops in Alabama aren”t twiddling their thumbs and allowing Antifa to wreak havoc. When Richard Spencer spoke last week at Auburn University, police forced those relentlessly disruptive and eternally smackable Antifa members to remove their masks before attending the speech. In Alabama, it’s illegal for masked people to congregate in public”and ironically, the law was originally set in place to prevent the KKK from wearing hoods in public.

The right for a black man to call a white communist a “punk ass nigga” is why we have a First Amendment in the first place.

STUDENTS: TRUTH IS A “MYTH”
A triumvirate of truth-seeking black students from California’s Claremont Colleges have sent a letter to outgoing Pomona College President David Oxtoby, condemning him for supporting the cuckoo idea of “free speech.” Oxtoby had approved a decision to host Heather Mac Donald, who”d planned to deliver a speech critical of the Black Lives Matter movement. Smearing Mac Donald as “a fascist, a white supremacist, a warhawk, a transphobe, a queerphobe, [and] a classist,” the letter also alleged that ideas such as truth and objectivity were indeed fictions peddled to keep white supremacy’s boot heels firmly planted on people of color’s throats:

Historically, white supremacy has venerated the idea of objectivity, and wielded a dichotomy of “subjectivity vs. objectivity” as a means of silencing oppressed peoples. The idea that there is a single truth—”the Truth”—is a construct of the Euro-West that is deeply rooted in the Enlightenment, which was a movement that also described Black and Brown people as both subhuman and impervious to pain. This construction is a myth and white supremacy, imperialism, colonization, capitalism, and the United States of America are all of its progeny. The idea that the truth is an entity for which we must search, in matters that endanger our abilities to exist in open spaces, is an attempt to silence oppressed peoples.

Truth is clearly no longer a defense against libel, because the truth is racist.

MR. NUGENT GOES TO WASHINGTON
Hyperactive rock star and gun-worshiper Ted “Motor City Madman” Nugent once referred to Barack Obama as a “subhuman mongrel“ and “a piece of shit.” He called Hillary Clinton a “toxic cunt.” He once implied that your average feminist was a “fat pig who doesn’t get it often enough.” In a 2012 essay, he suggested that it would have been better if the South had won the Civil War and has blamed Jews for the American gun-control movement.

On Wednesday night”along with Sarah Palin and Kid Rock”Nugent visited the White House at the behest of President Donald J. Trump.