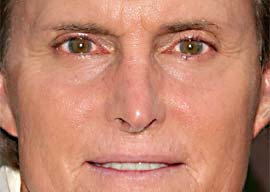 The Week’s Most Temperamental, Detrimental, and Occidental Headlines

BRUCE GENDER
Last Friday night, nearly 40 years after establishing himself as the world’s greatest athlete by winning the Olympic decathlon, Bruce Jenner became what is easily the world’s most famous man who thinks he’s a woman.

In a televised interview, the haplessly beleaguered patriarch of the squawking Kardashian clan announced that he is a woman, that he has the “soul” of a woman, and that he has known it since he was about five years old. He denied being gay, although his 1980 appearance in Can”t Stop the Music made him seem gayer than all the Village People combined.

Jenner revealed that he started taking hormone injections in the 1980s, that he now sports a pair of 36B boobs, that he underwent a tracheal shaving to minimize his Adam’s Apple, that he endured a series of rhinoplasties designed to give him a feminine nose, and that he of course makes all of these extreme alterations to who he really is in order to, you know, become who he really is.

His extended family supports him”his 89-year-old mother says his announcement made her even prouder than when he won the gold medal in the decathlon. The entertainment industry, but of course, supports him. And if you dare to do anything but support him, you are the delusional one.

In other news, the emperor’s new clothes look absolutely stunning.

BALTIMORE: NEXT CITY TO BURN?
It was yet another one of those damned peaceful protests that somehow turned violent.

Angered at the death of a black man named Freddie Gray”who died with most of his spine severed at the neck after Baltimore police arrested him and took him for a bumpy paddy-wagon ride”a familiar scene played out. On Saturday, what is by now a typical”and despite the venue, a visually interchangeable”throng of rambunctious, crotch-grabbing “teens” egged on by a sprinkling of scraggly white communists proceeded to smash, threaten, and grab their way through downtown Baltimore while the city’s Orioles played a game at Camden Yards. At one point in the evening, baseball fans were locked in the stadium and forbidden to leave as police choppers combed the skies.

“But what about the scraggly white communists?” you ask. Oh, they bus those in, just like they always do.

RAPING THE “SAFE SPACES” AT OBERLIN
Christina Hoff Sommers describes herself as a feminist. But her fatal flaw is that she refers to herself as a “Factual Feminist,” which infuriates, upsets, and ultimately “triggers” the newer incarnations of feminism that run purely on menses-smeared emotion and shrieking illogic.

She recently gave a speech at Oberlin College”the same place where that sweaty warthog Lena Dunham made a false rape claim against a male student”and was confronted by the usual gaggle of estrogen-poisoned lunatics who falsely accused her of denying rape and even supporting it. She was vilified with the sort of hateful hyperbole that these days ALWAYS seems to exceed whatever imaginary “hate speech” is being protested.

A letter to the school paper that was published three days before Sommers’s speech equated her words”none of which are violent”with literal violence. If you”ve been following these things, that’s increasingly common among the LGBT fanatics”accusing even the mildest critics of engaging in literal violence merely by uttering disagreement in the most milquetoast of manners.

Some students, terrified to even be exposed to her presumably toxic words, scurried away instead to a designated “safe space” where they wouldn”t be assaulted and aurally raped by her speech. On Twitter, Sommers wryly noted:

Oberlin activists had “safe space” for those triggered by my talk.Oberlin admin. provided police security to protect me from safe spacers.

Still, many antagonists were “brave” enough to attend her presentation. Many such rude, hysterical jackasses (actually, most were “jill” asses) sat at her lecture with their mouths duct-taped shut. Others lodged almost universally hostile questions at her. She was frequently interrupted.

I doubt my appeals to reason and rules of evidence made much of an impression. I hate to say it, but some of those students need the services of a professional deprogrammer. What I saw was very cult-like.

What was she expecting? It is, after all, a modern college.