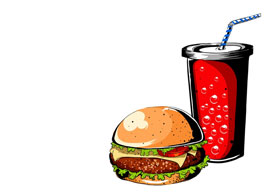 The Week’s Most Septic, Dyspeptic, and Narcoleptic Headlines

GROUNDBREAKING NEW RESEARCH ON OBESITY
If you”re a black woman who eats tons of hamburgers and guzzles gallons of sugary soft drinks, you may want to pay heed to a new study released by Boston University’s Slone Epidemiology Center. The prospective cohort study reviewed the cases of nearly 20,000 young women over a 14-year period ending in 2009 and came to this startling conclusion:

As of Sunday, the contact person listed on this press release has not returned an emailed request regarding how much this study cost. It also remains unclear why the study focused on black women, assuming that everyone piles on lard after stuffing their maws with burgers and chugging sugar-laden carbonated beverages. Even more mysterious is why anyone needed to conduct a study about whether junk food makes you fat.

The Annals of Internal Medicine had reported earlier this month about a fascinating study that concluded, against all expectations, that it’s unhealthy to be a big fat pig.

Possibly in light of this revelation, as well as to presumably honor the hordes of “undocumented workers” he requires to mow his lawn, tiny-fingered Chicago Mayor Rahm Emanuel held a 24-hour fast last week to push for so-called “immigration reform.”

NELSON MANDELA’S SLAPSTICK FUNERAL FESTIVITIES
If Nelson Mandela’s memorial services are any indication, the future does not look bright for the nation he helped liberate from the inherently evil (if organizationally superior) apartheid regime.

“The official statement described Jang Song Thaek as “despicable human scum…who was worse than a dog,” presumably because he was inedible.”

A reputed sign-language interpreter hired by the African National Congress was apparently faking it, leading to a sense of outrage and betrayal among luminaries in the deaf community. The allegedly “fake” interpreter, Thamsanqa Jantjie (try saying that with your fingers) was later revealed as a violent schizophrenic who would claim that he was possibly thrown off-kilter after hallucinating that angels had flown into the stadium.

The event’s dignity was undermined further when Barack Obama, British Prime Minister David Cameron, and Danish Prime Minister Helle Thorning-Schmidt posed for a selfie while Michelle Obama sat to the side looking displeased and somewhat bitchy.

Topping off this Carnival of Dysfunction was the fact that itty-bitty Bishop Desmond Tutu’s house in suburban Cape Town was burgled while he was in Johannesburg paying tribute to the expired Mandela. It was allegedly the second burgling of Tutu’s house in four months.

On Saturday, Tutu initially announced he would not be attending Mandela’s funeral on Sunday, then announced later on Saturday that he would be attending and that it had all been a wacky miscommunication with alarmingly inefficient government officials.

RUSSIA TALKS TOUGH ABOUT NUKES AND HOMOS
Vladimir Putin’s regime is flexing its ample and well-oiled pectoral muscles at the West again. On Wednesday, Russia’s Deputy Prime Minister Dmitry Rogozin warned that Russia would “of course respond with nuclear weapons” if America were to attack it using a global-strike program currently under development.

In Putin’s state of the nation address on Thursday, Russia’s president warned, “Nobody should have any illusion about the possibility of gaining military superiority over Russia.” He also lambasted the West’s “destruction of moral values” and railed against “so-called tolerance”genderless and infertile.”

This came after Putin had abolished the RIA Novosti news agency on Monday and appointed pro-Putin news anchor Dmitry Kiselyov the head of a new bureau that will presumably be kinder to Putin and harsher toward sodomites. In 2010 Kiselyov allegedly said homosexuals should be forbidden from donating sperm or blood. In 2012 he said they should also be banned from donating organs and that authorities should “burn or bury the hearts of gays” who die in vehicular accidents.

Joining in the homo-hatin’ hootenanny last week was Russian sitcom star Ivan Okhlobystin, who slammed “gay fascism,” labeled homosexuality a “psychical anomaly,” and said he wants to burn gays alive in an oven because they represent “a living danger” to his children.