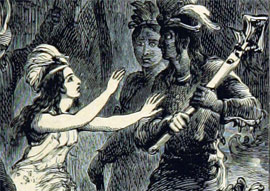 The Week’s Most Soaring, Warring, and Boring Headlines

WHAT WOULD POCAHONTAS DO?
From all appearances, Massachusetts Senator Elizabeth Warren is a white woman—a homely, shrill, mannish, unpleasant, humorless, ball-busting white woman, but a white woman nonetheless. Yet she insists she is the only Injun lady in the Senate.

While campaigning in 2012, much was made of the fact that she may have received favorable treatment in the Harvard Law School admissions process after claiming to be descended from Cherokee and Delaware Indians based on nothing more than family legend and the fact that she once plagiarized crabmeat recipes for a Native American Cookbook called Pow Wow Chow. She also insisted that she was descended from the noble red folk who once roamed these lands shirtless while sitting atop horses by noting that her grandfather “had high cheekbones like all of the Indians.”

But according to Cherokee genealogists—and everyone knows how vengeful they can be:

The team and I have done an exhaustive search on the genealogy of Elizabeth Warren. We have researched ALL of her ancestral lines, but have only posted those she claimed were Indian here in the blog. None of her direct line ancestors are ever shown to be anything other than white, dating back to long before the Trail of Tears.

Because he is much funnier than Elizabeth Warren, Donald Trump has taken to calling her “Pocahontas,” which causes many people to poop their diapers and call for the president to be assassinated. As we all know, it’s far more racist to mock a white person for pretending to be nonwhite than it is for a white person to adopt a “symbolic identity” that enables them to escape the sort of endless guilt complexes they’d needlessly heap upon themselves if they were to just be honest and admit that, yeah, they’re white.

Because so many white people don’t realize that you can never be “not racist” enough so long as you’re white, it makes us feel warm inside to see a woman who’s actually a member of Cherokee Nation taking Warren to task for clumsily attempting to wear redface.

“I am a Cherokee woman. Elizabeth Warren is not,” squawks a squaw with the decidedly palefaced name of Rebecca Nagle, who could easily pass for a Dago or a Frog, or maybe even a Mick.

“It was definitely not a nice week when it comes to people saying nice things about white people.”

We don’t care which one is a “real” Injun and which is merely a “Pretendian.” We’re happy just to see them clawing at one another.

Meanwhile, last week at the White House, Evil Fascist Nazi President Donald Trump honored Navajo Code Talkers while they all stood in front of an Andrew Jackson portrait, leading to outrage and laughter across what once was a nation.

QUEERING LITTLE PRINCE GEORGE
Because leftism is a perpetual motion machine that will never stop getting more ridiculous until someone forcibly blocks it from proceeding even one inch further, we must endure gross spectacles such as the ritual humiliation of Christianity by rebranding it as nothing more than Cultural Marxism in a Jesus costume.

In a blog post called “How to change the Church of England,” Anglican minister Kelvin Holdsworth and all three of his chins urge the faithful to plead with God to transform England’s Prince George—who is all of four years old—to blossom into an unbridled life of faggotry:

…pray in the privacy of their hearts (or in public if they dare) for the Lord to bless Prince George with a love, when he grows up, of a fine young gentleman….A royal wedding might sort things out remarkably easily though we might have to wait 25 years for that to happen.

TRANNY WEIGHTLIFTER IS AN INSPIRATION TO ALL DUDES WHO THINK THEY’RE CHICKS
Probably the best thing about the current nuclear wave of Tranny Mania is that, if left unimpeded, it will destroy women’s sports, firmly establish that gender is real and that men and women have different mean levels of athletic ability, anger lesbian feminists to the point where they engage in brutal and prolonged bloody street battles to establish dominance over male-to-female trannies, and herald in a new era where everyone returns to traditional gender roles, men stop being such pussies, and women wear chaste and modest Amish clothing while they resume baking pies.

Gavin Hubbard is a chubby dude from New Zealand who still looks like a chubby dude despite the fact that he now claims he’s a woman named Laurel Hubbard.

He is also a professional weightlifter who is now competing against chicks. At the Australian Open this year, he captured the heavyweight women’s crowns in both the snatch (heh-heh) and the clean-and-jerk (bwa-ha-ha-ha).

We hope that he becomes the best and most famous Male Women’s Weightlifter of the modern era.

ARTICLE: “YOUR DNA IS AN ABOMINATION”
Well, it was definitely not a nice week when it comes to people saying nice things about white people.

“Your DNA is an abomination,” screamed a brown male student at all white people in Texas State’s University Star newspaper. Philosophy major Rudy Martinez not only attacks “whiteness” as a phantom demon imperialist social construct but also as a biological reality, or why would this greasy, dimwitted dirtball even mention DNA?

When I think of all the white people I have ever encountered – whether they’ve been professors, peers, lovers, friend, police officers, et cetera – there is perhaps only a dozen I would consider ‘decent.’…You were not born white. You became white….Whiteness will be over because we want it to be. And when it dies, there will be millions of cultural zombies aimlessly wandering across a vastly changed landscape. Ontologically speaking, white death will mean liberation for all….Until then, remember this: I hate you because you shouldn’t exist. You are both the dominant apparatus on the planet and the void in which all other cultures, upon meeting you, die.

Now you listen right here, Senor Taco Tequila Gonzalez: When your peeps invent more than nachos, give us a ring. Until then, quit cloaking your inferiority complex under a matador’s cape of genocidal social-justice doggerel.

Evergreen State College—which earlier this year ran a Jewish professor off campus because he was obviously a Nazi—has quarantined a section in its student newspaper strictly “for people of color by people of color”:

Dear White people, please take a step back, this isn’t brown-people-answer-white-people’s-questions-hour, we’re asking specifically for submissions from POC….This should be a place where we can be us without it being overshadowed by the dark cloud that is living under white supremacy and having to see things from a white perspective. This is why when we do cover these issues it will be in the context and from the perspective of POC and POC only.

In Indianapolis, a former nurse named Taiyesha Baker—sounds Dutch—has been relieved of her duties after tweeting the following:

Every white woman raises a detriment to society when they raise a son….Someone with the HIGHEST propensity to be a terrorist, rapist, killer, and domestic violence all star. Historically, every son you had should be sacrificed to the wolves….

On Twitter, “anti-racist activist” Tim Wise—who claims with all the power of his hairy nostrils that he’s white but in 2010 salivated at the idea that white Americans’ hearts would eventually stop beating—encouraged the wholesale slaughter of white Alabamans should Judge Roy Moore win the upcoming election:

If white people elect Roy Moore in Alabama, no decent human being should ever spend another dime in that state, unless it is with a black owned business, or the Birmingham Civil Rights Museum. If Moore wins, it’s time to destroy white Alabama like we should have 150 years ago

Uncle Tim, it’s not very wise to say such things.