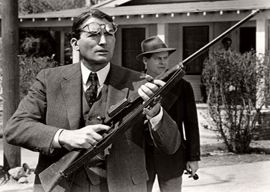 Gregory Peck in To Kill a Mockingbird

The Week’s Most Resistant, Persistent, and Inconsistent Headlines

MINNESOTA SCHOOLS KILL “MOCKINGBIRD”
If you—that’s right, YOU—living there in your institutionally racist bubble of marshmallowy white privilege—were under the impression that Mark Twain’s Huckleberry Finn and Harper Lee’s To Kill a Mockingbird were not only two of the finest American novels ever written but also searing indictments of white racism that make black people look noble and white people look like assholes, then you are dead wrong indeed, dear friend.

Unless you were unaware, there’s a certain word that appears in both books. In Huckleberry Finn, it appears more than 200 times. This is a word that is so awful that upon hearing it you’ll feel as if a pair of tiny demons squatted down in each of your ears and defecated. Despite how much we like to “kid” and “be irreverent” sometimes, no, the word is not “nougat,” nor is it “narwhal” or “nugatory.” Although it’s true the word begins with an “n,” it is also true that the word’s very utterance always ends in pain.

In Duluth, MN, there are about 40 white people for every lonely, shivering black person who is forced to live up there in darkness and pain in a hellish Nordic landscape that looks nothing like Wakanda. To spare these rare and precious African gems from having their pain amplified even a tad, the Duluth school district recently announced that for grades nine and eleven, it would replace Huckleberry Finn and To Kill a Mockingbird as required reading with anti-racist books that don’t contain that sinister and frankly evil word that rhymes with “chigger,” “trigger,” “bigger,” “digger,” “jigger,” and “snigger.”

According to the district’s director of curriculum and instruction Michael Cary, who looks absolutely Goodwhite to the core:

We felt that we could still teach the same standards and expectations through other novels that didn’t require students to feel humiliated or marginalized by the use of racial slurs.

Local NAACP prez Stephan Witherspoon, who looks like Ta-Nahesi Coates after a sumptuous dinner of 300 Big Macs, applauded the decision even while continuing to express his deep sense of racial disgruntlement:

There are a lot more authors out there with better literature that can do the same thing that does not degrade our people.

We can think of three such authors right off the top of our heads: Rudy Ray Moore, Clarence  “Blowfly” Reid, and Wesley Willis. All three men represent the African-American experience with charm, wit, and even an occasional bit of toilet humor.

“All the comedy writers can go home now. There is no need to write jokes anymore.”

The National Coalition Against Censorship—which apparently spends much of the day scurrying around trying to un-censor things—decried the school’s decision but then had to go and blow it all by insisting our educational system needs to cram books down the throats of young people and force them to “confront the vestiges of racism and the oppression of people of color.”

That’s all well and good, so long as you NEVER confront any of the reasons they may have been so easy to oppress in the first place.

RADICAL PROFESSOR BRAGS OF POINTING GUN AT JAMES FIELDS’S CAR IN CHARLOTTESVILLE
Since our major media outlets clearly hate us and want us rubbed out as soon as possible from the ever darkening and increasingly queer pages of history, they can’t even be trusted to tell you whether it’s sunny outside today.

As they told the story of the carnage in Charlottesville, VA, last August, a group of gun-wielding Nazis and Klansman stormed the city’s streets shooting guns and swinging truncheons until heroic throngs of anti-racists suddenly appeared to protect people of color, the poor, the elderly, the sexually challenged, and those of indeterminate genus and species. Then, filled with impotent hatred at the sight of so many kind and caring people, one young Nazi floored the gas pedal on his Dodge Challenger and purposely murdered a sweet young woman in an act of racist domestic terrorism.

Bet you didn’t know that there is no known footage of the Dodge actually making contact with that woman’s body and that her own mother told NBC News that her daughter died of a heart attack. Bet you also didn’t know that a female reporter at the scene initially issued a series of tweets claiming police said “the car was covered in dents prior and apparently hit by a bat” and “His car was being swarmed by protesters and some of them were getting violent” and “several police officers at the station here think the guy running people down wasn’t malicious…[he] was scared,” only to delete all those tweets a day later once The Narrative had taken hold.

Bet you also didn’t know that Dwayne Dixon—a scrawny and skeevy anthropology professor who looks as if he was the spawn of an HIV+ lesbian and a naked mole rat—bragged on Facebook about chasing James Fields, driver of that fateful Dodge Challenger, away with a gun only moments before the fatal incident:

I take a perverse pleasure in having carried this Spike’s lower in defense of Justice Park on August 12th. I used this rifle to chase off James Fields from our block of 4th St before he attacked the marchers to the south.

Here is video of Dixon speaking at Harvard about how he showed up that day to fight “the Nazis” and how he waved his gun at James Fields and told him to shoo.

And here is footage of a film team recently being assaulted by Dixon after asking him why he bragged about pointing a gun at James Fields. We’re not sure what incarnation of antifascism Dixon practices, but if he’s a communist, it’s a bit rich that he keeps warning the reporters that they’re on private property, and if he’s an anarchist, it’s even richer that his first instinct was to run and call the police.

When the full facts about Charlottesville finally come out, they may form the most comprehensive indictment of media malpractice in American history. Stay tuned, because we are on the case.

SCHOOL SCIENCE PROJECT ON RACE AND I.Q. DEEMED PROBLEMATIC
A male student in a Sacramento city high school who has been identified only as “Asian” has caused a global and perhaps intergalactic uproar after his science-fair project tried to explain disproportionate racial representation at his high-achieving magnet academy for reasons other than the default answer, which as we all know is “RACISM.”

In noting that Asians and whites at the academy outnumbered blacks and Hispanics, the Mystery Slope wrote:

…non-Hispanic whites and Northeast Asians have an IQ advantage of fifteen points over blacks and Southwest Asians, and 10 points over nonwhite Hispanics…[this makes]
the racial disproportionality of [the program] justified.

Holy moly, you can imagine the screeching butthurt that ensued. The display of his project was removed after two days on the premise that it “is likely to cause disruptions to our students.”

School officials apologized, hack reporters continued screaming about racism, and no one even bothered to attempt explaining what was factually wrong about the student’s project.