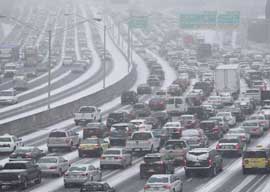 The Week’s Most Contemptible, Reprehensible, and Indefensible Headlines

ATLANTA’s TRAFFIC NIGHTMARE: BLAME THE SNOW BECAUSE IT’s WHITE
Atlanta”a city of barely a half-million people in a metro area more than ten times that size”was crippled last Tuesday by a monstrous winter snowstorm that dumped an ungodly TWO INCHES of the white stuff onto area roadways. In the midst of countless accidents and gridlock that had some residents stalled twenty hours before making the half-hour trip home, Mayor Kasim Reed”who seems to have only one nostril and always appears to be in the process of eating his own mouth“sailed through smoothly on emergency lanes to make an impromptu appearance at the Weather Channel.

Before the ice had melted, pundits who would be hard-pressed to name a single majority-black nation on Earth that isn”t a cesspool of disease, dysfunction, savage inefficiency, and gross corruption were blaming the debacle on the “white flight of the 1960s and 1970s,” “white folks’ fear of black folks,” and “white racial parochialism.” White people”at least the ones who aren”t entirely brain-dead or busy gnawing on their own entrails in self-serving public displays of ethnomasochistic self-loathing”are slowly starting to realize they”ll get blamed for everything, no matter how few of them are around to blame. And if they keep their mouths shut due to fear, they deserve to be buried in more than snow.

OBAMA: “I DON”T NEED NO STINKING CONGRESS”
During last Tuesday’s State of the Union Address, Barack Obama hammered on the idea of “income inequality” (without offering to give a dime of his millions to the less equal), called climate change “a fact,” threatened to bypass Congress and start issuing Executive Orders like a lightsaber-wielding Jedi knight, and parroted the absolutely misleading meme that women make 77 cents for every dollar that men earn. Meanwhile, Attorney General Eric Holder, who has repeatedly demonstrated that he is no friend of white people, gun owners, or conservatives, is threatening to release new guidelines regarding federal criminal investigations into the news media.

“If they keep their mouths shut due to fear, they deserve to be buried in more than snow.”

RETURN TO GENDER, ADDRESS UNKNOWN
Many French parents are up in arms about a gender-denying program called the ABCD of Equality that “aims to stamp out sexual stereotyping at an early age” and teach young”uns that “they aren”t born boys or girls, but neutral.” In protest, parents are pulling their children from school one day a month, which has resulted in some schools losing a third of their students. Confounding the earnestly blinkered attempts of the egalitarian culture-mixers, parents who are shielding their children from this propaganda disproportionately come from minority and Muslim areas. Predictably, the program’s supporters are dismissing all dissent as the creation of “right-wing extremists” and people who have “ties“ to alleged anti-Semites.

In Maine, the USA’s only monosyllabic state, a “transgender“ 15-year-old whose DNA test would reveal him to be a male has been granted the right to use female bathrooms, sending a message that his right not to feel uncomfortable trumps the rights of all the girls that his presence in the bathroom would make uncomfortable.

A movement calling itself “Free the Nipple“ is protesting “society’s wrongful censorship of the female body” by noting that while male nipples are not considered indecent, female nipples are. This is a cause we can get behind. Free the nipples, gals”you have nothing to lose but your bras!

Meanwhile, boys are becoming “a disadvantaged group“ relative to girls when it comes to university enrollment in the UK.

PAINTING WITH VOMIT AND BLOOD
An alleged “anti-Semitic fresco“ is causing an even more dubiously alleged “uproar” in Poland. A Jewish leader in Poznan is accusing Catholic priests of fomenting the age-old “blood libel” against Jews. Never mind that modern Western media and academia constitute an ongoing, never-ending, escalating blood libel against non-Jewish whites.

A church in Montenegro features its own controversy-engendering fresco, this time for depicting Karl Marx, Friedrich Engels, and Josip Tito suffering in hell.

Self-described former “Bohemian” Millie Brown starves herself for two days, drinks colored milk, vomits it onto canvases, and calls herself an artist.

GEORGE ZIMMERMAN’s CELEBRITY BOXING MATCH FOR CHARITY
Part-time painter George Zimmerman, who really should stay locked at home with his mouth taped shut, has signed a deal to box an as-yet-unnamed opponent on March 1 for charity. Promoter Damon Feldman allegedly said that Zimmerman is “open to fighting anyone…even black people,” whereupon seemingly every black person on the planet accepted the challenge. A rapper who goes by the handle “The Game” says he “would take pleasure” in knocking out Zimmerman. Rapper DMX, who enjoyed a brief spurt of fame about a dozen years ago before racking up a Dead Sea Scrolls-sized rap sheet, expressed a desire to “beat the living fuck” out of Zimmerman and “whip my dick out and piss on him.”