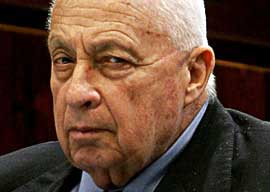 The Week’s Most Malicious, Suspicious, and Injudicious Headlines

THE LION (OF ISRAEL) SLEEPS TONIGHT
After being in a coma that lasted longer than the Holocaust, former Israeli Prime Minister Ariel Sharon (born Ariel Scheinermann) has departed the Holy Land for points unknown. Referred to variously as “The Lion of Israel,” “The Bulldozer,” and “The Butcher of Beirut,” Sharon is widely perceived as one of the most bullish and impenitent peddlers of Zionism-at-gunpoint that the world has ever witnessed.

Although George W. Bush called Sharon “a man of peace” and John Kerry eulogized him as a “man who sought to bend the course of history toward peace,” Ronald Reagan once allegedly made a diary entry referring to Sharon as “the bad guy who seemingly looks forward to a war.”

In later years Sharon denounced “terrorism,” but he”d made his bones in 1953 when he helped blow up 45 houses and kill 69 Palestinian villagers, most of them allegedly women and children. Sharon also played integral parts in the Six Day War, the Yom Kippur War, the erection of the West Bank barrier, and the bulldozing of Palestinian settlements. He is also thought to have passively allowed the 1982 slaughter of hundreds of Palestinian and Lebanese Shia by Christian militia members who reportedly mutilated and disemboweled infants, women, and the elderly.

“I think Sharon will be seen in history as the one who has perpetrated the most cruelty on the Palestinians,” said Palestinian legislator Hanan Ashrawi.

“Ronald Reagan once allegedly made a diary entry referring to Sharon as “the bad guy who seemingly looks forward to a war.””

CHRIS CHRISTIE’S TON OF TROUBLES
New Jersey Governor Chris Christie, the GOP’s Big White Elephant for 2016 despite his scalding criticism of libertarians and his support for amnesty-like legislation, faced the biggest crisis of his political career last week as details unspooled regarding intentional lane closures on the George Washington Bridge between New Jersey and Manhattan last September. Thought to be political revenge against the Democratic mayor of Fort Lee, NJ, for refusing to endorse the Republican Christie’s 2013 gubernatorial reelection campaign, the scandal is now being dubbed “Bridgegate” and has already led to the firing of some of Christie’s top aides. Christie held a nearly two-hour press conference on Thursday to discuss the scandal in which he claimed no knowledge of the intentional closures and said he felt “betrayed” and “humiliated” by it all. If it emerges that Christie had any knowledge of the closures and lied about it, all pundits agree that he is “toast,” although not one of them has bothered to explain how he would possibly fit into a toaster. Most of the prog media leaped eagerly onto the story and allotted far more time and focus to it than they did to Obama’s IRS scandal of last year.

PUT YOUR CLOTHES BACK ON, LENA
Lena Dunham, the portly and plain-faced creator of the HBO series Girls“which faced criticism a couple of years ago for being “too white””is now facing criticism that she is “too nude” on the show. During a panel discussion hosted by the Television Critics Association, critic Tim Molloy said to Dunham, “I don’t get the purpose of all the nudity, particularly by you.” Flabby and flustered, Dunham responded that her gratuitous nudity was “a realistic expression of what it’s like to be alive. But I totally get it. If you’re not into me, that’s your problem and you’re going to have to work that out with professionals,” as if expressing a distaste for fat, homely women with vestigial breasts is a sign of mental illness. One of Dunham’s female executive producers claimed to have gone into a “rage spiral” after hearing Molloy’s question, which producer Judd Apatow deemed “sexist,” “misogynistic,” and “offensive.” Oberlin graduate Dunham made waves during the last presidential election after recording a PSA likening voting for Obama to losing your virginity.

HEROIN IN THE GREEN MOUNTAIN STATE
The rustic log cabins, contented dairy cows, and grinning maple trees that have long made the tiny and almost entirely Caucasian state of Vermont an oasis from Northeastern urban insanity are all now being tainted by what Governor Peter Shumlin dubbed a “full-blown heroin crisis.” On Wednesday, Shumlin devoted his entire State of the State address to an opiate-addiction problem that has apparently exploded eightfold since the year 2000. Once a living Norman Rockwell painting, Vermont now routinely features traffic stops where police nab 1,250, 200, and 100 bags of the ineluctably addictive opiate. Vermont now reportedly has “the highest rate of illicit drug use in the country.” The USA also now has more than twice as many people who report using heroin than it did in 2002, a number that may be correlated to the easy availability of the prescription pill Oxycontin”which gets people hooked on opiates legally”and the fact that heroin is far cheaper than Oxycontin.