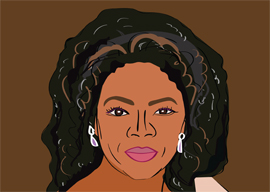 OPRAH FOR PRESIDENT!
Oprah Winfrey is loved across the globe for being the fattest black female billionaire in world history, and for that, she deserves to be worshiped! Most people know her for making film history after becoming the first female African American thespian to pee for ten minutes straight on film in Steven Spielberg’s heartwarming racial/gender drama The Color Purple.

Sure, even after America rewarded her with enough wealth to buy several African countries in addition to a lifetime Weight Watchers membership, she still feels fit to lie and say that millions of black Americans were lynched (actually, the best estimate pegs the total at around 3,446) and fabricate racist hate crimes against herself. Heck, according to her cousin, Oprah even lied about growing up poor.

Under the presumed guise of fighting racism, Oprah wasted no time in making it racial. In the very first freakin’ paragraph she noted that Sidney Poitier was a “black man” whose “skin was black,” which we’re assuming is how everyone was able to identify him as a black man. Then, in the second paragraph, she spills the beans that she’s a “black woman.” Then, but of course, she shares a tale from 1944 where a black woman was brutally raped by a group of white men. This is because in Hollywood, it’s become necessary to cite such cases from generations ago, because the modern interracial rape rates paint a very different picture.

“In a world where it’s forbidden to refer to girls as girls, only insanity is possible.”

In reaction to Oprah’s powerful acceptance speech, it was unanimously decided by everyone that hates Donald Trump that she should run for president in 2020 because even though they’re both billionaires, she has a black vagina and he doesn’t. And then, like, y’know, if the inspirational black woman billionaire beat the evil white male billionaire, it’d be like one of those cool movies and everyone could go back to being happy again.

Steven Spielberg says he’d support Oprah’s presidential candidacy, and since he makes edgy, high-risk movies that say the Holocaust and Nazis and slavery were bad, we think he should serve as her running mate. There were rumors a long time ago that Spielberg may just possibly be a pedophile, but that was a long time ago, and as we’ve already stated, those were only rumors.

THE YELLOW-SCALED WINGLESS DRAGONKIN OF GOOGLE
Last year a Google employee named James Damore was fired for suggesting that Google is the type of company that would fire people for having opinions that it dislikes.

Now he has filed a proposed class action lawsuit in California alleging that the space-age progressive kazillionaires at Google have failed to protect conservative white men from workplace harassment:

Damore, Gudeman, and other class members were ostracized, belittled, and punished for their heterodox political views, and for the added sin of their birth circumstances of being Caucasians and/or males….Not only was the numerical presence of women celebrated at Google solely due to their gender, but the presence of Caucasians and males was mocked with ‘boos’ during company-wide weekly meetings.

The suit also claims that Google’s workplace environment was openly hostile toward traditional heterosexual couples while it celebrated an employee who sexually identified as “an expansive ornate building” and allowed a presentation by an employee who identifies as “a yellow-scaled wingless dragonkin.” It says that in a climate where employees freely circulated memes about punching Nazis and Trump supporters, it was discriminatory to fire Damore merely for suggesting that mandatory diversity quotas may be unrealistic and counterproductive.

Google is an effective monopoly with a totalitarian ideological bent. It needs to be busted to pieces.

WHY ALL THE ANTI-MONKEY HATE SPEECH?
Regarding monkeys, it has always been our political stance that they are absolutely adorable, especially when you dress them up in cute little costumes and try to make them look human.

That’s why we don’t understand why, in the current year of 2018, after all the wars we’ve fought both on the battlefield and in the streets, everyone thinks it’s a bad thing when you compare people to monkeys.

This was most graphically and noxiously illustrated last week when the international clothing retailer H&M was found guilty of first-degree racism by the International Tribunal of Outraged Social Media Users after it featured an ad with a five-year-old black boy wearing a green hoodie that bore the message THE COOLEST MONKEY IN THE JUNGLE.

Would they have preferred if they called him the least cool monkey in the jungle? Why is everyone hatin’ on monkeys, anyway? This is not who we are. Aren’t we better than this?

In The Washington Post, a black woman who writes about black issues asks:

Why are black children always rendered as a monkey, and never a lion or graceful bird?

That’s a simple question that can be answered with a simple word: optics.

In South Africa, members of Julius “Kill the Boer” Malema’s Economic Freedom Fighters Party rampaged through at least a half-dozen H&M stores, smashing and trashing everything in their path in what we will presume was an attempt to prove that African people don’t act like monkeys.

The boy model is five-year-old Liam Mango. His mother Terry is a black woman who lives in Sweden. She claims she attended the photo shoot, had no problems with her son being declared the coolest monkey in the jungle, says the outrage is “unnecessary,” and urges people to “stop crying wolf” and “get over it.”