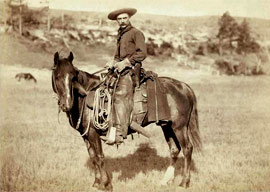 The Week’s Most Mutated, Castrated, and Backdated Headlines

“COWBOY”: A RACIST AND SEXIST TERM THAT NEEDS TO BE SCALPED
If you’re a nonwhite female who’s roaming the plains of Wyoming—AKA the “Cowboy State”—as nonwhite females are wont to do, you have every right to feel frightened, triggered, oppressed, and threatened by the term “cowboy,” seeing as how it excludes women and people of color from the transracial, cross-gender rainbow porridge bowl that Wyoming’s founders intended it to be.

Ignoring all the perfectly legitimate horror stories we’ve heard about history, the University of Wyoming still insists on calling its sports teams “The Cowboys,” knowing full well that this will send the hearts and souls of oppressed peoples throughout Wyoming into full-blown cardiac conniptions. To make things even worse, the school’s new marketing campaign slogan is “The world needs more cowboys,” which is really no different from saying “The world needs more Hitlers.”

According to a newspaper report, the slogan is problematic for two simple reasons: “The cowboy mascot is white. He is also a man.”

Darrell Hutchinson, a member of the noble Northern Arapaho Tribe as well as a “cultural specialist,” whatever the heck that means, explains:

If you’re not a white person, and especially if you’re an Indian, [the word “cowboy”] would make you feel out of place—it wouldn’t make you feel too good about yourself.

As everyone knows, Wyoming has always teemed with mulatto transgender pansexual cattle-ropers, which is why even uttering the term “cowboy” is a hate crime against all non-cowboys.

As university spokesman Chad Baldwin attempts to explain it:

“Wyoming has always teemed with mulatto transgender pansexual cattle-ropers, which is why even uttering the term ‘cowboy’ is a hate crime against all non-cowboys.”

In a vacuum, the term ‘cowboy’ appears gender- and perhaps race-specific, but in the context of the branding campaign it is connected to images and words that show our cowboys are diverse, of every sex and background….A cowboy is not what you are, but who you are.

Chad, we strongly suspect that John Wayne, Tom Mix, Randolph Scott, and Gene Autry would have called you a fag.

TERF WAR: FEMINISTS V. TRANNIES
The term “TERF” is an acronym for “Trans-Exclusionary Radical Feminists,” a group of women who are devoted to women’s causes and the women’s struggle and whose thighs chafe at the idea that men who claim they’re women are actually women rather than dudes who are trying to leap on the matriarchal bandwagon.

“Feminists Clash with Transgenders at London Pride Parade,” claims a headline at PJ Media, which makes the event sound a little more violent and exciting than it actually was. Alas, there were no street brawls, no mods v. rockers clashes between the two groups, but there was the predictable level of drama-queening about which group is truly oppressed and which one needs to shut its little trap and behave.

A pro-lesbian group called “Get the L Out” is demanding that the “L” be removed from “LGBT” because it’s obvious that trannies are a conservative moment who wish to return to traditional essentialist gender roles that want to turn “trans men” into heterosexual males rather than what they are, which is lesbians who have been taking hormone shots and are possibly seeking to saw off their boobs. According to a group mission statement:

[Transgender activism] promotes the right of heterosexual males who ‘identify’ as women and lesbians (despite most of them still retaining their male genitals) over the rights of lesbians to choose their sexual partners. This new ‘queer’ LGBT politics thus coerces lesbians to accept the penis as a female organ and promotes heterosexual intercourse between male and female as a form of lesbian sex….[We oppose] the social transition of lesbians, encouraging them to present as straight men thus favouring the pretence of heterosexuality over lesbianism — this is nothing more than a form of conversion therapy….This is simply a new facet to rape culture and compulsory heterosexuality.

Did you follow that? We didn’t, either, which makes it funnier. But as far as we can tell, since the “T” refuses to leave “LGBT,” the “L” is declaring its own secession movement, “GBT” be damned.

At the recent London Pride March, the group proudly and quite bawdily unfurled a “Transactivism Erases Lesbians!” banner to the shock and horror of the dramatically predisposed transactivists. The trannies acted “appalled” that such a “transphobic” group would be allowed to march with all the mentally healthy trannies who are fighting the Good Fight against the hatemongering moral leprosy of people who aren’t sexual deviants.

We’ll let these crazy, kooky perverts claw at each other’s hair and scratch out each other’s eyeballs so long as no decent, wholesome, and sexually healthy individuals get caught in the fracas.

LESBIAN S&M PARTY ENDS IN BLOODSHED
Speaking of moral leprosy among the deviant, a lezzie from the English town of Sheffield has been sentenced to life imprisonment for stabbing a female partner in the chest 17 times while whispering “sorry, princess” into her ear.

According to 25-year-old Sarah Holden, a muff-diver one year her senior named Shaunna Littlewood met up at Littlewood’s home for drinks, which soon led to kisses and then Holden consenting to a bit of S&M play by allowing herself to be bound hand and foot to Littlewood’s bedposts. But she hadn’t agreed to Littlewood brandishing a 12-inch kitchen knife and savagely attacking her with it, leaving her with a punctured lung, severed vocal cords, and requiring 50 stitches to her face. Holden says that she and Littlewood had been friends for most of their lives but that after being mutilated by her lesbian lover, she will find it hard to ever forgive her.

Don’t have lesbian sex, girls. You’ll wind up getting nearly stabbed to death.

GERMAN BLOGGER HOPES FOR A DE-GERMANIZED GERMANY
Veit Lindner is a German journalist with a robustly German name who can’t wait for the day when there are no Germans left in Germany. In a recent blog entry for the German version of Huffington Post, which we’re assuming is called Das Huffington Post, Lindner shares how he grew up hating himself for being German and hating other Germans because they were cranky, xenophobic, and not sexy at all. He loves the barren-wombed Angela Merkel’s open-door immigration policy and can’t wait until the non-Germanic hordes invade Germany in a massive wave that drowns every last legitimate Teuton:

If the stinking, bloated thoughts of the New Right should now be the ‘German people’ again, it would actually be best to simply exchange it…Blacks, browns, yellows, whites, Asians and Arabs, Africans, you people from America, from India, people of all faiths – come to our aid! Flock up and replace us, but thoroughly!….Let’s create a new Germany together, built on the values of democracy, diversity, solidarity and responsibility, but also out of fun and passion – a people who no longer need a chain link fence, because then we are either all foreigners, or no one else is….A little bit of genetic and cultural scattering here, a little bit of self-abolishment through fatigue of reproduction there – this would be, as Denis Yücel once put it, genocide from its most beautiful side.

Veit, we strongly suggest that Otto von Bismarck would have called you a fag.