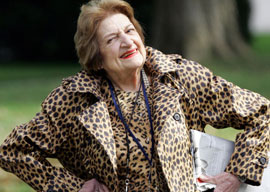 The Week’s Most Scintillating, Titillating, and Debilitating Headlines

THE DEATH OF HELEN THOMAS
Former UPI journalist Helen Thomas, who seems to have personally monitored the administration of every president since Millard Fillmore, died on Saturday at age 92. Feisty, scrappy, and unrelenting, Thomas was also ecumenical in her scrutiny of America’s commanders-in-chief, calling George W. Bush “the worst president ever” while claiming that Obama was worse than Nixon when it came to controlling the media. Despite her plaudits and laurels and endless awards, she was banished onto an ice floe for her 2010 statements questioning Israel’s legitimacy and stating that Jews needed to “get the hell out of Palestine.” Despite her public flogging, later that year she claimed that Zionists controlled American finance, media, and the White House. When asked about whether she was anti-Semitic, the daughter of Lebanese immigrants countered, “I’m a Semite. What are you talking about?”

A ROCK STAR NAMED DZOKHAR
Rolling Stone magazine, founded as a countercultural rag in 1967 but which has withstood the test of time to the point where it now represents the dominant culture, faced widespread criticism for featuring a photo of suspected Boston bomber Dzhokar Tsarnaev on the cover of its August issue. The photo, which has been reportedly reproduced from Tsarnaev’s Twitter page unretouched, shows the suspected terrorist appearing so soft and vulnerable, he may as well have been a puppy adopted from an animal shelter by Kurt Cobain. In response, Massachusetts State Police photographer Sean Murphy called the cover an “insult” and accused the magazine of “glamorizing the face of terror.” He released a series of photos from the Boston manhunt for Tsarnaev that were intended to portray him as “evil” rather than someone “fluffed and buffed for the cover of Rolling Stone magazine.”

“The ghost of Trayvon Martin continues to haunt the American media in the wake of George Zimmerman’s not-guilty verdict.”

PAGANS ‘N’ SATANISTS
French authorities arrested Norwegian heavy-metal musician Varg Vikernes, who served 16 years for murdering a rival musician and burning down four churches, on suspicion of planning a “a large terrorist act” because his French wife legally purchased four rifles and Vikernes had received a copy of mass murderer Anders Breivik’s manifesto. Lost in the hubbub was the fact that Vikernes, who identifies as a pagan, called Breivik a “Christian loser” and a water-carrier for Zionists. And members of a New York group that calls itself the Satanic Temple held a “Pink Mass” in Mississippi over the tombstone of flamingly anti-gay Kansas minister Fred Phelps’s mother, declaring her “gay forever” and that she will receive sexual pleasure every time a gay couple kisses over her gravesite.

ROOFTOPS ‘N’ DUNGEONS
Two grisly crimes in Brooklyn last week involved people falling from rooftops. Fifty-year-old Robert Reichl was reportedly lured to the top of a four-story building in Sunset Park by the promise of sex with two women, only to be robbed of $2,000 and Maced by male attackers, at which point he staggered backwards and accidentally fell to his death. In East New York, a sixteen-year-old girl was reportedly raped by two men and tossed from atop a three-story building, whereupon she suffered leg, back, and arm injuries. In Houston, police invaded a small purple house in which four elderly men and three mentally disabled women had been held in “deplorable conditions.” Their captor is thought to have been milking them of their disability checks.

DRONES ‘N’ PHONES
Despite massive negative publicity last month about the National Security Agency’s practice of mining American citizens’ telephone metadata, a “secret court” on Friday extended the program for another three months. And on Friday a federal judge said in court that she found it “disconcerting” that the nation’s executive branch was claiming that the judiciary had “no role” in deciding whether it was legal for the government to use drone attacks to kill American citizens on foreign soil.

THE CORPSE THAT REFUSES TO DIE
The ghost of Trayvon Martin continues to haunt the American media in the wake of George Zimmerman’s not-guilty verdict. “Bash-mob” attacks perpetrated by those pesky “teens” and “youths” and “young people” were reported throughout California last week, many of them thought to be related to Zimmerman’s acquittal. An LA TV reporter was assaulted on camera in the middle of an interview. In Milwaukee, a white man was taken to the hospital after being beaten by a gang of young’uns. He and a witness to the attack claim that one of his assailants told him, “This is for Trayvon.” A Hispanic man in Baltimore reportedly suffered much the same fate at the hands of roving youngsters.