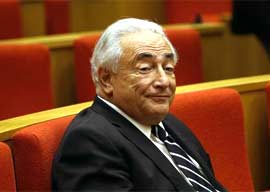 The Week’s Most Lascivious, Invidious, and Ridiculous Headlines

GOMORRAH IN THE WEST, SODOM IN THE EAST
Pterodactyl-faced ex-Congressman and Big Apple mayoral hopeful Anthony Weiner has been caught sexting again, this time under the undeniably seductive pseudonym of “Carlos Danger.” Weiner, who had a habit of screaming at Congress with the unhinged fervor of a premature ejaculator, held a press conference on Tuesday pleading for absolution and redemption and further access to naked political power. His incomprehensibly loyal”or understandably careerist, take your pick”Muslim wife Huma Abedin stood by his side and said she forgave him yet again, possibly relieved that none of the assembled reporters were asking pointed questions about her rumored lesbian affair with Hillary Clinton. A New York Times article about the scandal included the phrase “Mr. Weiner rarely shrinks.”

In San Diego, Mayor Bob “Filthy” Filner held a press conference on Friday to announce that he “will be entering a behavior counseling clinic to undergo two weeks of intensive therapy” in the wake of allegations from multiple women that include inappropriate buttocks-patting, cheek-stroking, and holding a woman in a headlock while slobbering down her chin.

French authorities have brought “aggravated pimping” charges against former IMF chief Dominique Strauss-Kahn, who should have known that pimps should always act with smooth composure rather than aggravation.

“The United Nations, that globalist monkey wrench which seeks to turn the entire world into one big happy cooperative commode under its eternal thrall, has declared that November 19 will be “World Toilet Day.””

Lithuanian demonstrators threw eggs at gay-pride marchers in Vilnius, while Russian Orthodox Patriarch Kirill declared that the push for same-sex marriage represents “a very dangerous sign of the apocalypse” and “Those who are true to their conscience in fighting these minority-imposed laws are subject to repression.”

BIG BROTHER GETS NEW EYEGLASSES
Unnamed “industry sources” in Silicon Valley are claiming that the feds have requested various Internet giants to provide them with users’ stored passwords.

By a 217-205 vote, Congress shot down an amendment to curtail the NSA’s authority to snoop on American citizens’ telephone records.

Rhino-shaped and RINO-spirited New Jersey Governor Chris Christie bemoaned a “very dangerous…strain of libertarianism” as exemplified by Kentucky Senator Rand Paul. Christie weighed heavily”yes, pun intended”on the side of security in the eternal debate of freedom versus security in protecting Americans from “terrorism,” perhaps not pausing in between bites of his calzone to ponder that such massive government surveillance could have the effect of terrorizing citizens into silence. In a measured response, the much more svelte Senator Paul refrained from calling Christie a big fat fattie.

The Atlantic ran a piece wondering whether MRI technology would one day advance to the point where it could record a person’s thoughts and if so, whether the government could “get a search warrant” and use such evidence against individuals without violating the Fifth Amendment.

In perhaps the most chilling and Orwellian news story so far this year, MIT neuroscientists have announced that they are now able to “plant false memories” into mouse brains, opening the possibility that they will be eventually able to “tinker with the memory by directly controlling the brain cells.”