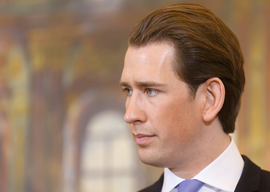 SUPREME COURT: YOU DON’T HAVE TO BAKE THAT GAY CAKE AFTER ALL
Bad news for people who insist on a constitutional right to force bakers to make them a gay cake: By a 7-2 vote, the US Supreme Court ruled that not only can’t you have your gay cake and eat it, too, you can’t have your gay cake at ALL if your baker doesn’t want to bake it.

The only two justices who insisted on the right of gay people and their enablers to order a gay cake wherever bakers bake cakes were Sonia Sotomayor and Ruth Bader Ginsburg. It figures. (Chicks!)

Refusing to bake gay cakes has landed bakers in legal hot water in Oregon, Colorado, and Iowa. The Supreme Court decision involved the Colorado case, where Jack Phillips, proprietor of Masterpiece Cakeshop in Lakewood, told a gay couple that his religious beliefs forbade him from baking a cake whose message essentially celebrated the legal union of two men who suckle on each other’s genitals and diddle each other’s buttholes.

Homo activists, who tend to be dramatic and therefore hyperbolic, had likened Phillips’s refusal to bake a gay cake to the sort of hateful act that historically led to nasty things such as slavery and the Holocaust. The Supreme Court, bless their black gowns, rejected such piffle, arguing that sexual freedom and religious freedom must be balanced.

So if you want a gay cake, there are plenty of gay bakers who’d be tickled pink and pleased as punch to bake you a cake so gay, you can sodomize yourself with it. But now you must accept that if someone doesn’t want to bake you that gay cake, you can kick rocks, gayboy.

If you want an anti-gay cake, nothing’s stopping you from baking the most homophobic cake imaginable. At the moment we doubt there are many American bakers willing to whip you up a GOD HATES FAGS cake, but we like to keep hope alive. Just don’t try to get anyone to bake you a birthday cake for Adolf Hitler, even if that’s your real name.

NEW SOUTH AFRICAN DRUG CRAZE: INJECTING EACH OTHER’S BLOOD
In the breathtakingly scenic nation of South Africa, where the residents have lived a prosperous, harmonious, and 100% crime-free existence ever since Nelson Mandela rose from the dead and cured racism there forever, ghetto-dwellers are sharing drugs in the most intimate way possible—by injecting themselves with each other’s drug-addled blood.

A drug called “nyaope”—pronounced “un-yop-pay”—comes in a white powder and can be either smoked with marijuana or injected. One source describes its ingredients as being “anything from rat poison, heroin, detergent powder, anti-retro-viral drugs, milk powder, pool cleaner to bicarbonate of soda”; another calls it “a cocktail of heroin, antiretroviral drugs and even crushed glass and rat poison.” In some South African slums, an estimated one out of every five adults is hooked on it.

Injecting someone with nyaope, then drawing a little of their blood back into the dropper and injecting it into yourself is known as “bluetoothing.”

Apparently the first hit of nyaope is the best you will ever do, and thereafter you’ll fall into a bottomless pit of chasing that first high and never getting there as you vomit and your bones ache and you wind up dragging yourself through landfills barefoot and covered in sores.

There are also the, erm, health considerations about injecting yourself with crushed glass and rat poison. Oh, and that HIV thing. One in every five adults in South Africa has that, too.

HOUSTON POLICE: YOUTH MADE UP STORY ABOUT BEING KIDNAPPED BY WHITE SUPREMACISTS
The city of Houston, Texas—which is extremely diverse, which means that people really don’t talk to each other or even make eye contact—was rocked last month at the news that 13-year-old Zavion Parker, an adorable black child with a winning smile and a bright future, was kidnapped by a group of white supremacist thugs who beat him and racially taunted him and even stole his jacket and smartphone, because that really happens a lot, you know, with the racist white gangs kidnapping black kids and stealing their phones. Little Zavion said that the ringleader of the white gang had a tattoo that said, “I HATE BLACK PEOPLE,” which, to be quite honest, sounds a bit mildly worded for the leader of a Nazi gang.

The woman who first discovered sweet little Zavion running down the street shoeless, with a torn shirt and looking disoriented was a woman named Camecia Carmouche, and we mention that merely because it’s a great name.

But now after a thorough police investigation, it turns out that Zavion concocted the whole tall tale himself because he felt a void in his life that there were actually no groups of white thugs willing to kidnap him and steal his phone.

The Houston Police Department says “there is absolutely no reason to believe there is a group of white supremacists abducting children in the area,” and that news is likely to disappoint different types of people for different reasons.

GANG OF “ASIANS” ATTACKS BRITISH YOUTHS, LEAVES ONE WITH BLEEDING ON THE BRAIN
Now if you’re looking for a racially motivated violent attack that may actually not be another sick hoax, look no further than the English city of Rochdale, which is also one of many places across that once-mighty nation that has been demoralized at the hands of Muslim rape gangs.

British police say that around 2AM on Saturday, June 2, two cars collided near a roundabout, one carrying three indigenous white Britons and the other packed with four or five “Asians”—which basically means “Pakistanis” if you speak American like so many of us do. When 17-year-old rugby player Matthew Hayden got out of his car to confront the people who slammed into his car, they ran right the hell over him, then got out of the car and attacked him en masse, with one of them apparently wielding a crowbar, cracking his skull and making his brain bleed. Then the driver attempted to run over Hayden again. The injured rugby player was able to roll away into an alley, where he reportedly called his parents to tell them “I’m dying, I love you” as he lay on the ground bleeding.

Matthew survived, but his dad told a reporter that his speech is slurred, he drinks through a straw, and he lamented that his assailants had destroyed his life.

What’s unique in this case is that not only is the press reporting that the “Asians” hurled racial epithets at the three white Britons, they’re not claiming the whites provoked them racially in any manner, which usually seems to be what the press does in such cases. And what’s even more remarkable is that police say they’re investigation the incident as a hate crime, because we thought whites were only capable of committing them, not experiencing them.