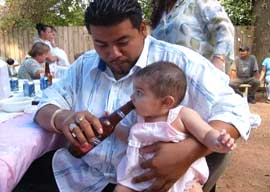 Father’s Day has been called “the Rodney Dangerfield of Holidays” and was essentially created as an afterthought to Mother’s Day. It wasn’t declared a national holiday until 1972, while Mother’s Day has been legally enshrined since 1914. Americans spend 55% more for Mother’s Day gifts than they do on Father’s Day, although it’d be hard to argue that fathers don’t spend far more money supporting their families than mothers do.

This escaped mention amid all the negative, sneering, and dismissive coverage of the holiday. Whereas fathers were hammered en masse for not spending as much time with their kids as mothers do, no one seemed to suggest that this is likely due to the fact that many of them were spending far more time working and earning a paycheck than mothers were.

“Why do we only hear negative stories about fathers and never about mothers and children?”

Some exploited Father’s Day as an excuse to push political agendas that were at best tangentially related to the holiday and at worst barely related to fatherhood itself. USA Today printed an article using Father’s Day as a springboard to “end sex trafficking,” because, well, um, most of those who solicit underage female prostitutes are men, and, eh, every one of those underage female prostitutes has a father somewhere. Capisce? Another USA Today article told of how the father of a boy murdered in the Sandy Hook massacre is using Father’s Day to urge Americans to pester the government about restricting gun rights. And in Chicago, police honored the holiday by making a public display of rounding up deadbeat dads.

And rather than using the holiday to honor the financial and emotional support that millions of fathers provide, many used it as a springboard to tell the world how much their fathers sucked.

Jezebel.com, which postures as a pro-woman site in order to be as anti-male as they feel entitled to be, vented its estrogen-addled spleen about “deadbeat dads” after carefully attempting to clarify that this phenomenon was not related to racial or socioeconomic factors, statistics be damned. The site’s always lively and misandrist comments section included the following turd nuggets of unabashed and unintentionally comical loathing for males:

I don’t talk to my dad and he can go fuck himself if he thinks I’m gonna celebrate him for being a shit parent to me for these past couple of decades.

As someone who is repeatedly bullied into speaking to/seeing her dad, I can relate. We are not family and he can go suck it….So, with doudble-daddy [sic] issues let’s all sing: “Fuck you, guy.”

I never met my father because he ditched my mother before I was born and never paid a cent. I’ve made peace with it by now, but still think hes [sic] a total sack of shit.

The editors of Yahoo News claim they “invited readers to share stories about the most acrimonious, contentious and difficult times they’ve experienced with their fathers” in a piece whose headline mentioned “the dark side of Father’s Day.” It included testimonials exclusively from disgruntled females, one of which was entitled “My father, my albatross.”