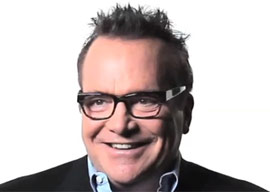 The Week’s Most Sadistic, Simplistic, and Fascistic Headlines

IS TOM ARNOLD A C.I.A. MIND-CONTROL ROBOT?
If it is true that whom the gods would destroy they must first make mad, the gods clearly have it out for Tom Arnold, because this pig-faced has-been has gone insane.

The allegedly former coke addict—mind you, the “allegedly” there refers to the “former,” not the “coke addict” part—self-described victim of childhood sexual abuse, and a man that the world both grudgingly admires yet openly despises for having a strong enough stomach to have sex with Roseanne Barr is the latest Hollywood no-hit wonder to stake his nonexistent reputation on a vow to “take down” Our President and Glorious Leader Donald Trump.

The aggressively talentless showbiz barnacle appeared on CNN and MSNBC last week twitching and glaring and sounding like he either had a head cold or maybe a quarter-ounce of cocaine stuffed in his nostrils. After these performances, it is quite clear that he is being used as a Brain Pawn for some sort of top-secret government mind-control project. No one is this insane on their own.

And, just like everyone else who has confidently predicted Trump’s demise since the moment he declared his candidacy for president, Tom Arnold says he’s 100% certain that a man who is known only for having the fortitude to perform sexual intercourse with the mottled mud sow Roseanne Barr will FINALLY be the dude to put this tiny-fingered, orange-skinned lump of human cancer in his place.

In the course of announcing that he’d been signed as the star of an upcoming “reality” series for Vice called The Hunt for the Trump Tapes, Arnold went out of his way to hint that he had a ton of dirt on the president and that the whole situation was far too important for him to “eff” around, and he actually said “eff” rather than “fuck,” which is the first sign that you know someone’s not fucking around. On both cable programs, this chubby pink porcupine of a man assiduously avoided all direct questions except to state that Trump is “a racist” and that his equally corpulent former wife had fallen in “with Nazis and racists and just crazy, crazy, crazy.”

For his part, Michael Cohen says that although he posed for a selfie recently with Arnold, any allegation that he’s teaming up with him to release the infamous “pee tape” or tapes of Trump saying “nigger” and calling his son a “retard” is crazy, crazy, crazy.

“If it is true that whom the gods would destroy they must first make mad, the gods clearly have it out for Tom Arnold.”

CATCH A FALLING STARBUCKS
Starbucks makes bitter black coffee for white people who claim they love black people but are secretly terrified of them. After all, although they are tremendous entertainers and have a history filled with heartbreak and triumph, black people drive down property values in the urban gentrification pockets where Starbucks franchises tend to flourish.

The chain recently faced a great deal of public shaming after a Philadelphia Starbucks barista demanded that a pair of black men who wished to use the bathroom needed to order something. Starbucks offered a groveling apology, closed down all stores late in May for some sort of Communist Chinese sensitivity seminar, and basically became America’s toilet and communal homeless shelter for fear of ever again offending a single skinflint black male with a weak bladder.

It also recently bent over backwards apologizing for an incident in which a California barista wrote BEANER on a Hispanic customer’s cup in what may have been an innocent mishearing of the name “Peter.”

However, to our knowledge at press time, it has never tried to counter the allegation that its coffee is flavored “with the semen of sodomites.”

Now, to the likely dismay of its shareholders, the company’s stock fell 10 percent last week and Starbucks has announced plans to shutter 150 stores next year.

Now THAT is what we call social justice.

“REFUGEES WELCOME” ACTIVIST MURDERED WHILE HITCHHIKING
In the latest grim example of well-meaning white people virtue-signaling themselves to death comes news that a 28-year-old German woman named Sophia Lösche, a dedicated “refugees welcome” activist who saw the highest virtue in Germany being overrun with non-Germans, has been murdered by a Moroccan migrant who picked her up hitchhiking. He admitted dumping her body—which showed burn marks and evidence of violent abuse—near a gas station.

Lösche’s older brother, a progressive German politician, seems more concerned that he has allegedly received “death threats from right-wing people” than the fact that his own sister was killed by an African migrant whose very presence in Germany is enabled by left-wing people such as him.

ACLU TO FAVOR “PROGRESS” OVER FREE SPEECH
Apparently reeling from the fire-breathing backlash from groups such as Black Lives Matter over the fact that it filed legal documents that allowed the ill-fated “Unite the Right” rally to almost happen last August in Charlottesville, VA, the American Civil Liberties Union appears to be tilting away from civil liberties and selling itself out to appease the peddlers of those indefinable phantoms known as “civil rights.”

Last week someone leaked an internal ACLU memo titled “ACLU Case Selection Guidelines: Conflicts Between Competing Values or Priorities.” In it, the “conflict” is defined as one between free speech and the infantile notions of “equality and justice”:

Our defense of speech may have a greater or lesser harmful impact on the equality and justice work to which we are also committed, depending on factors such as the (present and historical) context of the proposed speech; the potential effect on marginalized communities; the extent to which the speech may assist in advancing the goals of white supremacists or others whose views are contrary to our values; and the structural and power inequalities in the community in which the speech will occur.

Goodbye, ACLU. You’ve become a zombie like the rest of them.

UGLY WOMAN: WOMEN HAVE A RIGHT TO HATE MEN
On a good day, Northeastern University professor Suzanna Danuta Walters is a 2 on a scale of 10, and that’s being generous. It’s not so much that her face looks like it was hit by a shovel as that her face looks like a shovel that hits people in the face. She acts as her university’s director of the Women’s, Gender, and Sexuality Program, which typically denotes a man-hating lesbian who owns either cats or Siberian huskies—and usually both.

Because it is committed to fighting hate and stereotyping on all levels, the Washington Post recently ran an op-ed by Walters called “Why can’t we hate men?”

What a dumb question. Obviously you can hate men. With all of the abundant hate that dwells within your soul. We’re sure that within five minutes of meeting you, there isn’t a person on Earth who’s unaware that you can hate men, and very well at that.

Mistaking emotion for logic as her gender tends to do, Walters ululates:

[It] seems logical to hate men. I can’t lie, I’ve always had a soft spot for the radical feminist smackdown, for naming the problem in no uncertain terms….For all the power of #MeToo and #TimesUp and the women’s marches, only a relatively few men have been called to task… maybe it’s time for us to go all Thelma and Louise and Foxy Brown on their collective butts….So men, if you really are #WithUs and would like us to not hate you for all the millennia of woe you have produced and benefited from, start with this: Lean out so we can actually just stand up without being beaten down. Pledge to vote for feminist women only. Don’t run for office. Don’t be in charge of anything. Step away from the power. We got this. And please know that your crocodile tears won’t be wiped away by us anymore. We have every right to hate you.

Predictably, Walters blames her bottomless wells of bitterness on the “patriarchy” rather than the fact that she couldn’t find a patriarch who found her attractive.