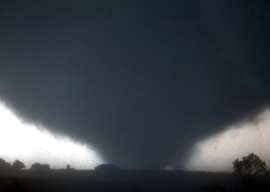 SPECIAL “DELIVER US FROM CHAOS” EDITION

The past week brought a near-catastrophe in the celestial realm, a deadly calamity in the meteorological realm, and news of a potential pandemic in the biological realm. And here on the ground where human beings rub elbows and battle over resources, a perfect storm seems to be gathering as well.

At around quittin’ time on America’s East Coast on Friday afternoon, an asteroid nearly two miles wide“large enough to have its own moon as a sidekick”whizzed within 3.5 million miles of Earth, which is considered uncomfortably close by astrophysical standards. Astronomers say that an asteroid less than half that size would obliterate all human existence if it struck the planet. But at least this week, the planet’s humble, foolish, and shortsighted earthlings were spared.

After a monster tornado killed 24 Oklahomans on May 20, another deadly twister ripped through the flat, bleak OKC area with winds reaching over 200MPH. Nine people were killed, streets were flooded to a depth of four feet, and grapefruit-sized hailstones were reported in some areas.

“At least this week, the planet’s humble, foolish, and shortsighted earthlings were spared.”

In France last Monday, a 65-year-old man died of multiple organ failure due to an infection from Middle East Respiratory Symptom Coronavirus, which has caused 27 fatalities since September 2012. The director-general of the World Health Organization warns that the virus is a “threat to the entire world,” especially because it has spread from Saudi Arabia to other Middle Eastern nations and continental Europe since its discovery.

Speaking of the Middle East, conditions in that arid, war-torn, oil-rich swath of geopolitical chaos continue to hurtle along pell-mell toward Armageddon. Last month saw over 1,000 people killed in Iraq, its bloodiest month in five years. The US Embassy warned Americans not to plan any trips to visit the Egyptian pyramids due to increasingly anarchic conditions in that nation, where electrical blackouts are becoming more common and violent harassment of tourists, much of it thought to be perpetrated by Muslim Brotherhood members, is reportedly on the upswing. Police in Turkey used tear gas and water cannons to subdue anti-government protestors. An Iranian TV broadcast last week showed over two dozen transporter erector launchers allegedly capable of launching missiles into Israeli territory. In response to such “aggressive” and “provocative” displays, Israel’s supporters encourage anything from preemptive strikes to nuclear retaliation to an Iran-obliterating electromagnetic pulse to a series of emotionally humiliating and painfully punitive thunderbolts tossed straight from the God of Israel’s hand that would forever neuter the Kingdom Formerly Known as Persia. And in what is widely perceived as a tactical move in which Syria is being used as a chess board, Russia’s state media has reported they will be supplying that nation with “at least 10 fighter jets.”

Memorial Day festivities in the USA were not as violent as they were two years ago, although the official inauguration of the summer season saw smatterings of public mayhem, the sort that the mainstream press tiptoes around blaming it all on “youths,” “teens,” and “young people.” In the Detroit suburb of Orchard Lake, the St. Mary’s Polish Country Fair was disrupted by mob violence perpetrated by people of a decidedly non-Polish derivation. One such non-Polish teen was arrested on domestic-terrorism charges after posting an Instagram photo prior to the event that featured an array of guns and the warning, “We not playin wit nobody at the fair.” On Memorial Day evening at Jacksonville Beach in Florida, multiple fights featuring yet more teens and youths marred what was supposedly a family event.

Continuing in the vein of this underreported yet seemingly ubiquitous phenomenon of “teen” violence against people who in many if not most cases are not “teens,” authorities in Syracuse, NY, charged a 13-year-old and a 15-year-old”both of them black”last week in the May 23 beating death of a 51-year-old white man. In Fridley, MN, a group of seven Somali men reportedly assaulted a pair of joggers in another case that was largely ignored. And at a Cleveland kindergarten graduation ceremony, someone apparently spilled some fruit punch on someone else, which led to teen participants pulling out a pipe and a hammer on one another, leading to yet another full-blown brawl.