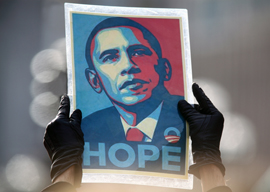 (Disclaimer: Please disregard all of the following, because the mainstream media and America’s social-sciences community have already established beyond all doubt that anyone who criticizes, or even dares to think bad thoughts about, America’s 44th president is motivated solely by blind feral bigotry, which is a defect of character”and, verily, the soul”that is exclusive to white males.)

As far as weeks go, last week was really weak for Barack Obama. Or, as Elmer Fudd might say, it was a weally weak week for that wascally wabbit. We feel that we can say with impunity that Obama is beginning to show chinks in his armor, because the plain fact is that he is not Chinese.

Not only was Obama’s administration rocked by the Benghazi hearings and revelations that the IRS during his reign has targeted Tea Party and “patriot” groups for extra scrutiny, it has become increasingly evident even to Obama’s Borg-like defenders that he may care more about appeasing his wealthy benefactors and toasting his celebrity friends than he does about uplifting the vanishing middle class and the squirming proletarian masses.

“Last Wednesday’s Benghazi hearings lent strong suspicion to the idea that Obama’s Administration has been lying about the incident all along.”

Although esteemed pundits ranging from semi-retarded choco-walrus Al Sharpton to nasally inflected Floridian yenta Debbie Wasserman Schultz dismissed the ongoing Benghazi scandal as mere Republican political grandstanding”as if politics ever consisted of anything more than politicians playing politics against other politicians, no matter their political party”last Wednesday’s Benghazi hearings lent strong suspicion to the idea that Obama’s Administration has been lying about the incident all along.

White House Press Secretary Jay Carney, UN Ambassador Susan Rice, and even Barack Obama himself on David Letterman’s show had blamed Benghazi on outrage over the video Innocence of Muslims. But former Deputy Chief of Mission at the US embassy in Tripoli Gregory Hicks testified before the House Oversight Committee on Wednesday that he’d informed Hillary Clinton during the attack that the US consulate was under siege by an organized terrorist group, only to be “stunned” and “embarrassed” when Susan Rice subsequently went on television to blame the video. Government emails in the wake of the siege revealed that administration officials scurried to change talking points in ways so that the word “Islamic” was removed from the phrase “Islamic extremists” and the word “attack” was downgraded to “demonstrations.”

It has been speculated that prior to last November’s election, Obama’s flunkies covered up the attack’s terrorist underpinnings”and essentially blamed it all on an “Islamophobic” video rather than radical Islamists”because one of the Obama campaign’s selling points was that he’d killed Osama bin Laden and essentially neutered al-Qaeda.