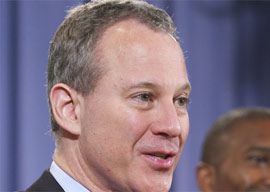 The Week’s Most Predatory, Statutory, and Transitory Headlines

IS NEW YORK’S ATTORNEY GENERAL A RACIST, WOMAN-BEATING SEXUAL PREDATOR?
New York State Attorney Eric Schneiderman has basked in the estrogen-tinted afterglow of the #MeToo movement, posturing as a champion of women’s rights and launching a high-profile criminal investigation against Harvey Weinstein.

In April he tweeted out his congrats to The New Yorker for its career-shattering work on uncovering the Weinstein scandal:

Without the reporting of the @nytimes and the @newyorker — and the brave women and men who spoke up about the sexual harassment they endured at the hands of powerful men — there would not be the critical national reckoning underway.

Schneiderman has long positioned himself as a savior of women against the slimy predations of powerful men. In 2010 while a New York state senator, he introduced a bill that would criminalize non-life-threatening acts of choking so long as they demonstrated “an intent to impede breathing.”

As recently as May 1, he was feted at some pro-abortion luncheon in New York where he told a crowd of fetus-slaughtering cosmopolites, “If a woman cannot control her body, she is not truly equal.”

Therefore, it should come as no surprise—at least not to those who realize that those who shout the loudest are those that need to be watched most closely—that The New Yorker just released a blockbuster expose alleging that Schneiderman has a long history of beating, choking, and threatening women.

Four female accusers, two of whom went on the record, shared essentially the same story—that Schneiderman was a Jekyll & Hyde-style drunken monster who’d verbally demean them, smack them at full force when they least expected it, choke them hard, and threaten to kill them if they told anyone, bragging that not only did he have the law on his side, he was the law.

“It’s good to see such an effusively sanctimonious twat such as Schneiderman hoisted on his own erection.”

A spicy redhead with mischievous eyes named Manning Barish said she met Schneiderman in the summer of 2016. She says he frequently called her a “whore” and a “dirty little slut,” recalling one incident where he slapped her while she was fully clothed and they were not engaged in any amorous play:

All of a sudden, he just slapped me, open-handed and with great force, across the face, landing the blow directly onto my ear. It was horrendous. It just came out of nowhere. My ear was ringing. I lost my balance and fell backward onto the bed. I sprang up, but at this point there was very little room between the bed and him. I got up to try to shove him back, or take a swing, and he pushed me back down. He then used his body weight to hold me down, and he began to choke me. The choking was very hard. It was really bad. I kicked. In every fiber, I felt I was being beaten by a man….Our top law officer, this guy with a platform for women’s rights, just smacked away so much of what I thought he stood for.

Tanya Selvaratnam is a Harvard-educated “activist” with an unpronounceable surname who also says she met Schneiderman in the summer of 2016. Like Manning Barish, she claims he smacked, choked, demeaned, and threatened her—with the added twist of racial abuse:

Sometimes, he’d tell me to call him Master, and he’d slap me until I did…he started calling me his ‘brown slave’ and demanding that I repeat that I was ‘his property.’…we could rarely have sex without him beating me…it was a fairy tale that became a nightmare….This is a man who has staked his entire career, his personal narrative, on being a champion for women publicly. But he abuses them privately.

Back in 2013, our glorious leader Donald J. Trump, who is looking more and more like a prophet of God, predicted Schneiderman’s downfall in a tweet:

[Anthony] Weiner is gone, [Eliot] Spitzer is gone – next will be lightweight A.G. Eric Schneiderman. Is he a crook? Wait and see, worse than Spitzer or Weiner.

It’s good to see such an effusively sanctimonious twat such as Schneiderman hoisted on his own erection.

On May 4 she attended an anti-NRA protest in Dallas to show her opposition to all those NRA members who have gone on mass shootings in recent years, even though if you want to get all technical and factual and autistic about it, no NRA members have ever gone on mass shootings and most gun murders are committed by people who don’t legally possess the guns in the first place.

Of course, Milano wasn’t going to mix with the plebs without being surrounded by a retinue of armed guards. In fact, many of the most vocal-anti-gun activists refuse to go out in public unless they’re protected by a phalanx of armed guards, because otherwise they might become victims of one of those NRA mass shooters you keep hearing about in the news.

YALE SUPPORTS NAPS FOR THE NAPPY-HEADED
Yale University is an esteemed institution of higher learning where any hysterical black student can force a teacher to resign merely by screaming at them for being racist because they said everyone needs to calm the hell down and quit getting offended about Halloween costumes.

Following in this highly intellectual and not at all chimp-like tradition comes word that the school president has publicly apologized after a national scandal erupted when a woman called the police because another woman was sleeping in a residence hall common area.

As it happens, the woman who called the police is white. The sleeping woman is black. To our knowledge, these basic facts—and absolutely nothing that transpired between the two women, at least not anything that was articulated by the white woman—are all the media needed to make this yet another story of blacks being brutalized by racist whites in Donald Trump’s America.

The black student, who insists on using the self-segregating and frankly ridiculous name of Lolade Siyonbola, offers zero corroborating evidence for the following declarative statement:

Sure, it had nothing to do with the fact that she was detained because the ID she showed police featured her “preferred” name rather than her real name and the police were simply attempting to figure out why she was using two names.

The next day, a deeply chastened Yale University sent out a mass email describing NapGate as “deeply troubling” and reaffirmed the school’s dedication to tackling every last instance of “racial bias, discrimination and harassment.”

But why are black people sleeping in public anyway? Who do they think they are—Mexicans?