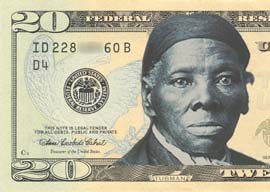 The Week’s Most Audacious, Tenacious, and Salacious Headlines

CAN AMERICA STOMACH HARRIET TUBMAN’s FACE ON THE $20 BILL?

It’s hard to imagine a universe in which Harriet Tubman would be considered an attractive woman. But even though she’s been dead for 102 years”which would presumably make her homelier than ever”Harriet Tubman just won a beauty contest.

An activist group called “Women On 20s” has nominated Tubman to replace Andrew Jackson on the $20 bill.

Jackson, you see, was white. He was also a male. And he was involved in that whole “Trail of Tears” thing that still has people crying nearly 200 years later. So clearly he has to go.

Tubman, on the other hand, was undeniably as black as a crow dipped in motor oil. And at least according to legend, Miss Tubman was also a woman. Thus, as a black alleged woman, she represents two allegedly oppressed groups”blacks and women. She is, in the argot of racial huckstering, a “twofer.”

Online voters enabled Tubman to edge out the three other finalists in the contest to replace Old Hickory with a token female. Tubman muscled her way past Eleanor Roosevelt, who was commonly known as a “nigger lover” way back when she had a habit of posing for pictures with smiling black children. Tubman also squeaked by Rosa Parks, a woman known for enjoying her bus rides toward the front of the vehicle. Harriet Tubman also soundly thrashed Wilma Mankiller, who from her name alone sounds like some ball-busting misandrist Injun psycho squaw. Compared to Wilma Mankiller, it would be preferable to have Wilma Flintstone on the $20 bill.

“It’s hard to imagine a universe in which Harriet Tubman would be considered an attractive woman.”

Not everyone was satisfied with Tubman’s nomination, however. Cognitively impaired actress-singer Raven-SymonÃ© appeared on the menopausal squawkfest The View to offer her well-informed viewpoint that it should have been Rosa Parks instead:

No offense to everyone that’s going to be mad at me for saying this, I don”t like that idea. I think we need to move a little bit forward. Let me just preface that I understand the history, I get it, trust me, I was taught, I was in that culture….I would”ve chosen Rosa Parks….I would have chosen someone that is closer to the progression that we”re doing now. I know you have to understand history so you don”t repeat it, but that doesn”t happen in our world, because we still repeat history of hating other cultures over and over again. I would choose a different woman, no offense.

No offense, Raven, but you sound as dumb as a brick. But that’s what your foresisters such as Harriet Tubman and Rosa Parks fought for”the constitutional and God-given right for dingbats such as you to freely express your daffy, stillborn opinions on daytime TV talk shows geared toward disgruntled, unemployed, and mostly overweight American women.

WILL CANADA MAKE IT A HATE CRIME TO BOYCOTT ISRAEL?
Canada and Israel are great friends. One might even fairly call them “BFFs.” When the weather is warm, they even go camping together. It is rumored that on at least one occasion, they even shared a hot tub together.

Now from the Great White North come allegations that the Canadian government is planning to criminalize boycotts of Israel under existing hate-speech laws.

Speaking at the UN this past January, Canada’s Public Safety Minister Steven Blaney said his country has a…

…zero-tolerance approach to anti-Semitism and all forms of discrimination, including in rhetoric towards Israel, and attempts to delegitimize Israel such as the Boycott, Divestment and Sanctions movement.

When Canadian Broadcasting Corp. reporter Neil Macdonald emailed Blaney’s office for clarification about the “zero tolerance” comment regarding the BDS, a representative pointed him toward a section of the Canadian Criminal Code outlawing “hate propaganda.”

Despite all that, Blaney’s office dismissed Macdonald’s story as “inaccurate and ridiculous…[a] bizarre conspiracy.”

Canadian Prime Minister Stephen Harper has referred to the Boycott, Divestment and Sanctions (BDS) movement as “the new face of anti-Semitism.”

In other news, Harper and Benjamin Netanyahu were spotted giving one another foot rubs in a secluded mountain sauna somewhere in Alberta.