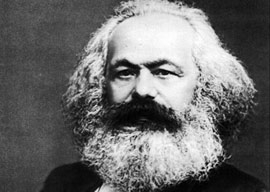 CELEBRATING MARX IN SPITE OF HISTORY
“Those who do not remember history are doomed to repeat it,” wrote philosopher George Santayana, but we suspect that even he couldn’t have anticipated the glut of collective amnesia currently plaguing the West about the historical disasters wrought by Karl Marx’s philosophy.

The New York Times committed credibility hara-kiri back in the early 1930s when its columnist Walter Duranty purposely denied the Holodomor while Ukrainians were dropping dead from hunger in the streets.

The Times continued that ignoble tradition of denying communist atrocities when it recently celebrated the 200th anniversary of Karl Marx’s birth with an article titled, “Happy Birthday, Karl Marx. You Were Right!” Written by one Jason Barker—who looks exactly like the sort of smug-but-clueless twerp who in 2018 remembers Karl Marx as anything but a historical hemorrhoid—the essay fails to mention the gulags and the Red Terror and the Great Leap Forward and the Khmer Rouge. It also fails to enumerate a single thing about which Karl Marx was “right.”

Instead, Barker appears to feel tingles running up his leg as he enthuses about Marx’s “boundless intellectual enthusiasm,” his “philosophical relevance,” and how orchestrated mass witch hunts such as #MeToo and Black Lives Matter merely add a gender and racial dimension to Marx’s naïve economic egalitarianism. He ends his essay with the hope that Marx’s vision “is finally realized.”

In the name of journalistic integrity, we expect the Times to offer a companion piece about how we’ll all be happier the day that the Fourth Reich is finally realized.

Trying to at least appear more evenhanded, The Irish Times ran a piece titled “Karl Marx at 200: What did he get right?” You don’t need to read it: The Cliffs Notes answer is “nothing.”

“If anyone should know that Karl Marx was a total jerk, it’s the Russians.”

The Hindu—although we’re not sure which one, there are are over a billion of the little brown buggers worldwide—claims that “The world we live in is the one repaired by Marx,” despite the 100+ million eggs broken to make an omelet that no one has ever seen, much less eaten.

Ironically but understandably, in Russia, Marx is now “all but forgotten.” Only about three percent of modern Russians list him as one of the top ten people who ever lived. And a robust quarter of Russians say they don’t even know who Karl Marx was.

If anyone should know that Karl Marx was a total jerk, it’s the Russians.

UNIVERSITY DEPICTS MASCULINITY AS MENTAL-HEALTH ISSUE
As everyone is already painfully aware, “toxic masculinity” is a plague upon our culture that threatens to restore the natural male/female balance and harken a new Dark Age of stable families and happy couples.

At the University of Texas—Texas used to be a good state founded by cocky, smirking Germans in cowboy hats who never apologized for their own existence because they were too busy forcing other people to apologize—the Counseling and Mental Health Center has started a program designed to help male students “take control over their gender identity and develop a healthy sense of masculinity.”

Of course, attempting to “act like a man” or to be “successful” or “the breadwinner” is not remotely healthy. Neither is “taking care of people” nor even being “active,” since these “place men into rigid (or restrictive) boxes” that prevent men from crying at pictures of kittens or electing for radical gender reassignment surgery.

To rectify racial inequities in the art world, the director of the Baltimore Museum of Art has announced plans to sell off over $10 million worth of art by Evil Demon White Male artists so they can acquire more works by “black Americans” to appease the hungry ghetto rats of Charm City who just can’t wait to hang around in art museums. In order to accommodate up-and-coming Artists of Color, the museum is selling off works by white dudes such as Andy Warhol and Robert Rauschenberg, whose very brushes and canvases were purchased with the blood, sweat, and tears of Painters of Color.

Director Christopher Bedford—a man who likely has nowhere near the talent of Andy Warhol, Robert Rauschenberg, nor even the aspirant Negroidal painters who for all we know are merely smearing their feces on canvases like so many randy baboons—says the switch to a more blackety-black museum will be “absolutely transformative.”

FLYING WHILE FAT AND BLACK
Amber J. Phillips is a fat black feminist who, for reasons that remain hidden to us, feels no shame about any of those three designations. In fact, she fairly basks in them like a hippo lazily thrashing about in a mud pool.

She was recently on an American Airlines flight and made a huge stink about the fact that a woman next to her—one that Phillips made a point of identifying as “white,” although we highly doubt the woman made a point of Phillips’s race—wasn’t happy that Phillips’s big fat black feminist arm kept touching hers as they sat next to one another.

When all was said and done, police were summoned to interrogate Phillips for no other reason than the fact that she’s fat and black, because there’s absolutely not a chance in Hades that she was acting like a loud, obnoxious, entitled race-baiter. According to Phillips:

In my heart I know this woman was trying to get me kicked off the plane…. I made the white woman siting next to me uncomfortable bc my arm was touching hers on flight AA5580. The cops were called on me for flying while fat & Black….White folks are using literally any excuse to get police involved and that puts Black bodies in danger. They call the cops on Black folks like it’s their personal customer service….I expect my fatness and my Blackness to be held together with dignity in every space I occupy.

Lady, you can’t even keep your emotions together on a 45-minute flight. And there is no dignity in being fat—it is one of the most undignified things that a human being can do. Nor is there a shred of dignity in making about your “blackness” rather than your “personality.”