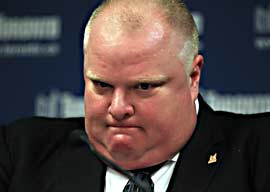 The Week’s Most Thankless, Chancrous, and Cantankerous Headlines

FINALLY, A WHITE MAYOR WHO SMOKES CRACK
The Toronto Star released video of the city’s mayor, a corpulent slab of sweaty ham named Rob Ford, throwing a conniption and making violent death threats against an unnamed antagonist. Among the highlights:

Toronto Police Chief Bill Blair confirmed the existence of a videotape in which Ford appears to be smoking crack cocaine while making comments deemed insensitive toward homosexuals and nonwhites. Ford admitted to smoking crack “during a drunken stupor.”

New York City elected its first Democratic mayor since 1993 in the towering form of Bill de Blasio, who has shown no remorse for aiding Marxist Sandinista rebels in the early 1980s nor for marrying a black woman whose first claim to fame was a 1979 article in Essence magazine where she flaunted her lesbianism as if it was a badge of honor. De Blasio’s wife said that Mr. Bill, who poses as a champion of “the 99 percent” and has promised two extra school holidays to honor Muslim festivals, fell in love with her the moment he espied her “wearing West African-inspired clothing and a nose ring.”

“It remains unclear what separates so-called ‘neo-Nazis’ from old-school Nazis, although we suspect it’s somehow analogous to the infamous branding struggle between New Coke and Coke Classic.”

Detroit has elected its first white mayor since 1974. Mike Duggan faces the formidable task of plugging the multiple holes in a sinking municipal ship and setting it on a course of prosperity and functionality it hasn’t seen since, well, its last white mayor.

EUROPEAN NATIONALISM: PORK MEATBALLS AND STARVING CAUCASIANS
The New York Times claims that “right-wing populists” are “rattling established political parties with their hostility toward immigration, austerity and the European Union.” This trend that strikes terror in the clogged hearts of EU bureaucrats and statist predators is incarnated in the form of pork meatballs, which have been banned from Danish kindergartens in deference to Muslims. Mikkel Dencker of the Danish People’s Party cites the missing meatballs as evidence of how “Denmark is losing its identity.”

Last Monday, throngs of Russian nationalists estimated to number somewhere between ten and twenty thousand stomped through Moscow’s streets chanting “Russia for Russians” and “Stop Feeding the Caucasus.” A poll by the Levada Center reveals that Russians have not been browbeaten into passive acceptance of unbridled immigration and demographic dilution to nearly the degree that Americans and other Western Europeans have. Nearly three-quarters of Russians polled favored deporting migrant workers, while two-thirds tended to agree with the sentiment “Russia is for Russians.” Karl Marx, Lazar Kaganovich, and Leon Trotsky could not be reached for comment since they are all dead.

RUSSELL BRAND, PROPHET OF REVOLUTION
Ex-junkie and current dimwit Russell Brand, whose net worth is estimated at $15 million even while he rails against “the rich” and “capitalism,” penned a tortured and childishly unspecific call for “revolution” in a guest editorial for the New Statesman.

For me the solution has to be primarily spiritual and secondarily political….The model of pre-Christian man has fulfilled its simian objective….I hate big banks and banking and bankers….In my mind the revolution has already begun.

AFRICAN RAPE AND LESBIAN MUSLIMS
The idea that marital rape should be criminalized remains “controversial” in several African countries, especially Nigeria, Ethiopia, and Kenya, where rape is deemed an act that can only occur outside of wedded union and the stigma instead falls upon wives who refuse to put out on demand.

Lesbian Muslims apparently dressed like Google logos want the world to know that they are simultaneously lesbian, Muslim, and proud, as if any of us would actually notice them if they weren’t parading around with placards that would likely get them beheaded in most majority-Muslim countries. Lesbian Muslims. Let’s not even think of how all that might smell.

An article in Slate bemoans the idea that even if technology were able to extend the average human lifespan to 150 years, women still might not be able to “have it all” in the oppressively testosterone-laden atmosphere of this institutionally sexist society. Everyone with good sense knows that by the time a woman reaches 140, it’s time to settle down and have kids. They also know why men die younger than women on average”because they want to.