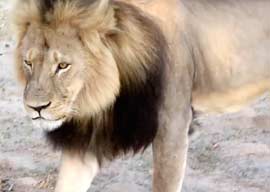 The Week’s Most Petulant, Succulent, and Truculent Headlines

CECIL THE LION ACCUSED OF FELINE PRIVILEGE
When news broke last week that a popular Zimbabwean lion named Cecil had been fatally shot by a Minnesota dentist, the Internet erupted with outrage”which outraged other people even further because it deflected attention away from their myopic focus on black people as the world’s only acceptable victims.

“We Weep For African Lions. But What About Black Lives?” earnestly wept the Huffington Post headline. “Did death of lion draw more outrage than death of black males?” another headline pointedly asked. “Why aren”t we as universally outraged over Sandra Bland’s death as we are over Cecil the lion?” asked yet another headline, perhaps not considering that a fundamental principle of thermodynamics is that there’s only enough universal outrage to go around at any given time.

For countless black Americans and their untold legions of earnestly deluded white enablers, it became painfully apparent yet again that in this racist and horrible nation, #LionLivesMatter more than #BlackLivesMatter, and that’s a damned shame. Even though the killing of a lion had very little to do with black people, that’s exactly the point, and if you don’t understand that, you’re obviously part of the problem.

“When even the rappers are apologizing, all hope is lost.”

You know, I have never seen a black person order a salad.

Network executives were appalled by the suggestion that black people don’t eat salad, because everyone knows that black people are people just like everyone else, and everyone enjoys the occasional salad, even though very few people, especially TV producers, can honestly lay claim to having been an eyewitness to a black person actually eating a salad in real life.

SGT. PEPPER’s LONELY HOLOCAUST PARODY MARCHING BAND
The Ohio State University marching band”often referred to as “The Best Damn Band in the Land””is in hot water over allegations that a 2012 songbook featured a parody ditty that trivializes the Holocaust.

The offending song is called “Goodbye Kramer” and is sung to the tune of the 1980s smash hit “Don’t Stop Believin’” by Journey. It allegedly includes lyrics about Nazi soldiers “searching for people livin” in their neighbor’s attic,” and a “small town Jew…who took the cattle train to you know where.” Other lyrics singled out for their insensitivity include”and remember, this is sung to the tune of “Don’t Stop Believin’”:

Other songs allegedly included “lyrics about rape, bestiality and homosexuality.” The university issued a statement accusing the marching band of indulging in “shocking behavior” and promising that the school’s marching-band program would forever cease and desist from mocking the only known victims of World War II.

GERMANY’s LADIES-ONLY PARKING SPACES: ARE THEY SEXIST?
Many parking lots in Germany offer spaces specifically set aside for women. Frankfurt Airport even boasts of its pink-painted “bigger and nicer” female parking spaces that are closer to the terminal than the ordinary, smaller, non-pink spaces that male drones are forced to wriggle into. Although the idea of ladies-only parking spaces originated in the 1990s as a reaction to a reputedly patriarchal rape culture where women are constantly threatened with sexual assault in airport parking lots, now women are complaining that the parking spots are “sexist” because they reinforce stereotypes about bad female drivers, since obviously they need more space to properly park their cars than men do. So would they rather be raped? Seriously, you can’t win with these broads.